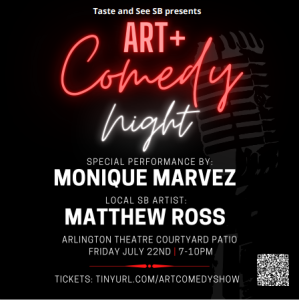 Join us at the Arlington Theatre Courtyard, as we showcase the art of local SB artist Matthew Ross and present the marvelous comedic talent of Monique Marvez  as seen on Showtime, HBO and Comedy Central.

About the Artist:
Matthew Ross is a Santa Barbara-based artist, focused on portraiture and landscape work in oil, acrylic and charcoal mediums.

His passion is capturing the essence of a moment. Matthew believes that anything can be captured with the right openness, whether it be the peculiarities of a loved one's smile, that feeling that comes with an early morning birdsong, or an unforgettable night with friends.

?About the Comedian:
Monique Marvez is a one-of-a-kind writer, comedian, as well as versatile radio and TV personality. Her television career has exploded with four Showtime specials: The Latin Divas of Comedy, Snoop Dogg Presents the Bad Girls of Comedy, and her own one-hour special Not Skinny, Not Blonde which is based on her critically-acclaimed book of the same name.

Monique has also appeared on HBO, Comedy Central, ABC, PBS, hosted Dick Clark’s Rockin’ New Year’s Eve from South Beach and was hand-picked by best-selling author John Gray to write the touring stage show version of his iconic Men Are From Mars; Women Are From Venus. With her sharp wit and impressive improv skills, Monique has the stellar ability to tailor a performance on the spot to appeal to all audiences.

Event details:
- $30 for a 3 hour event
- Seating will be first come, first served
- Outdoor heated, covered courtyard
- All art pieces are for sale
- Art can be taken that night or
packaged to ship
- Meet & Greet with Matthew
to discuss commissioning a piece
- Matthew will do a live painting
of the Comedy Show in 1 hour
- Silent Art Auction of that live painting
immediately following Comedy Show
- Proceeds given to Matthew to
help start his new art endeavor
- 2 full service cash bars:
- beer: $7-$10
- wine: $8-$14
- cocktails: $8-$16