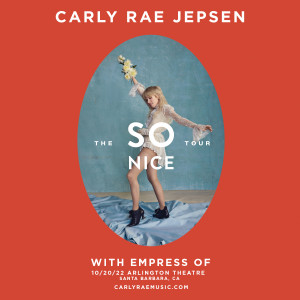 Canadian singer/songwriter and breakout pop sensation Carly Rae Jepsen (http://www.carlyraemusic.com/) has taken America by storm after bursting onto the scene in the US with her hit single “Call Me Maybe.” Unforgettably catchy, the hit song which she co-wrote quickly rose to the No. 1 spot on the Billboard Hot 100 chart where it remained for nine consecutive weeks. Certified quintuple-platinum in Jepsen’s native Canada the track is also an international sensation, climbing to No. 1 on the iTunes Singles charts in over 47 countries while the official video has over 400 million YouTube views and the song has sold more than10 million singles worldwide to date. Follow up platinum single “Good Time,” a duet with Owl City, climbed to No. 3 on the Pop Chart, while the video has racked up over 84 million YouTube views. Jepsen released her debut album Kiss on September 18 via 604 Records/Schoolboy Records/Interscope Records along with her latest single "This Kiss.” Billboard recently named Jepsen its “Rising Star” at the 2012 Billboard Women In Music Awards, and she won the 2012 American Music Award for Best New Artist. Jepsen received two 2012 GRAMMY nominations for Best Pop Solo Performance and Song of the Year. Carly’s new single, “Tonight I’m Getting Over You” is out now and she will be on tour in the US later this summer.

It has also been announced that Jepsen will appear in iconic fashion brand Candie’s’ Spring 2013 multi-media marketing campaign, which has also featured such superstar spokeswomen as Britney Spears and Fergie. Carly was recently named the first spokeswoman for millennial natural personal care brand, güd (http://www.gudhappens.com) from Burt’s Bees where she will appear in a multi-faceted campaign debuting this Spring.