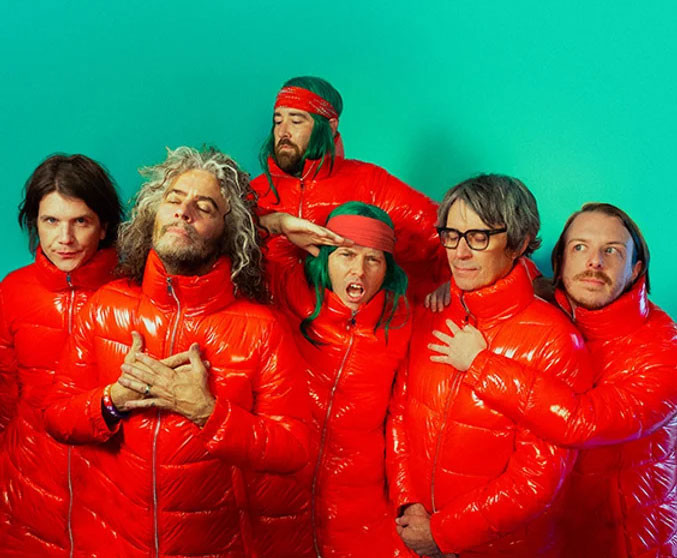 Returning to the road in the new year, The Flaming Lips will embark on An Evening With Tour throughout the West Coast in 2023. These career-spanning headline gigs find the alternative rock stalwarts mining their catalog for what promises to be an epic and unforgettable two-hour set. The tour will include a performance at The Arlington Theatre on Thursday, March 9, 2023.

In other big news, the group’s classic, life-affirming single “Do You Realize??” just earned a gold certification from the RIAA. It adorns their classic 2002 album, Yoshimi Battles the Pink Robots.

They just celebrated the 20th-anniversary of this classic with the release of an expansive box set that includes B-sides, demos, remixes, radio sessions, two concerts, and other assorted rarities from the era. The CD set includes over 50 tracks never released and dozens of rare tracks. The LP box set has 40 tracks never released on vinyl and over 30 previously unreleased tracks. Yoshimi Battles the Pink Robots: 20th Anniversary Edition is available now, via Warner Records, on all streaming services and as a 6 CD box set (featuring 100 tracks).

Also, THE FLAMING LIPS SPACE BUBBLE FILM is featured exclusively on The Criterion Channel now. This concert documentary, directed by Wayne Coyne and Blake Studdard and filmed in the band’s hometown of Oklahoma City in 2020, chronicles the logistical challenges of putting on a show at the height of the pandemic. The Space Bubble Concerts would feature both band and audience encased in individual transparent, prophylactic Space Bubbles to insure a Covid-safe live LIPS experience, connecting in a joyous, socially distanced communal way never tried before.

As previously announced, The Flaming Lips have scheduled shows in London and Washington, DC that will feature the album performed in its entirety. Shows in Chicago and Atlanta have just been confirmed. Click HERE for information.

Released in July 2002, the sci-fi-themed quasi-concept album Yoshimi Battles the Pink Robots remains the commercial high-water mark in The Flaming Lips’ wild four-decade journey, giving them their first RIAA certified Gold Record. As the eagerly awaited follow-up to 1999’s masterwork The Soft Bulletin, Yoshimiproved that singer/guitarist Wayne Coyne and multi-instrumentalist Steven Drozd had yet another masterpiece in them. The record yielded the band’s top-streamed track, “Do You Realize??” (a timeless stargazing anthem that, in 2009, was named the Official Rock Song of the band’s native Oklahoma) and also landed the Lips their first-ever GRAMMY Award® win for the cosmic album-closing instrumental “Approaching Pavonis Mons by Balloon (Utopia Planitia).”  Click HERE to view and share “Wayne listening to the multi-tracks for “Do You Realize??”

About The Flaming Lips:

Formed in Oklahoma City, OK in 1983, The Flaming Lips have since become one of the most iconic, influential, unpredictable, and vital forces in American alternative rock music. The band has garnered three GRAMMY® Awards, a Tony nomination, and an RIAA Gold-certified Record for Yoshimi Battles the Pink Robots. Q Magazine named them one of the “50 Bands to See Before You Die.”  The band has made countless late night television appearances, appeared in a Super Bowl commercial, contributed to many film soundtracks, and collaborated with artists such as Miley Cyrus, Coldplay’s Chris Martin, Kacey Musgraves, Yoko Ono, The Chemical Brothers, and so many more. They have set countless records, broken records, created spectacular interactive audio/visual events now regarded as legendary.  Front man Wayne Coyne has been recognized for works of art that graced many LIPS album covers along with his traveling art exhibit “The King’s Mouth,” an audiovisual art installation that has been featured in many contemporary art museums around the US.  Their latest LP, American Head, marks a return to a more melodic and song-oriented body of work and has critically been lauded as their best work in years placing on several Year End/Best Of lists around the world. Evan after a combination of 22 studio recordings, 16 singles, 11 compilations, 11 EP’s and 11 self-released experimental collaborative oddities released in various forms, quantities and unique mediums, The Flaming Lips remain in a creative apex that has no bounds. To that end, they have become an American Treasure and created a genre all to themselves.