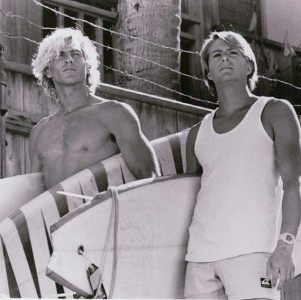 Eighteen year-old Rick Kane has just graduated from high school. He uses his winnings from a wave tank surfing contest in his native state of Arizona to fly to Hawaii for the summer before the start of college, in order to try to become a professional surfer. He takes a plane to Honolulu with plans to stay with a surfer that he met in Arizona six months previously. He finds the friend tending bar at a seedy gentlemen's club.

At the bar Rick meets up with two pro surfers, Alex (Robbie Page)[1] and Mark (Mark Occhilupo), and stays with them at the house of Lance Burkhart. In the morning, he goes out surfing with Alex and Mark and realizes that surfing in the ocean is totally different to surfing in a wave tank. He is not as good as he had initially thought. They end up at Sunset Beach and tries to paddle out, not knowing how to duck dive he struggles his way out to the line-up. During this scene he gets in the way of Vince Moaloka (Gerry Lopez), who is leader of a local group named "The Hui" ("The Club"). This causes Vince to wipe out and leads to a confrontation where Rick is chased off the beach, after he realizes his stuff was stolen from the beach by another member of the Hui.

With nowhere to go, he fortuitously runs into Turtle (John Philbin). Kane also meets and falls in love with Kiani (Nia Peeples), a beautiful local girl, coincidentally the cousin of Vince, who helps him acclimate to the local culture and customs. Turtle introduces him to Chandler (Gregory Harrison), a surfboard shaper and soul surfer, who teaches Rick about soul surfing and Rick masters the art of appreciating and riding the waves. During Rick's stay, Chandler is marveled at Rick's talent for art and he then designs a new graphic for Chandler.

The film's antagonist is Lance Burkhart (Laird Hamilton), a famous, top-ranked surfer whose competitive and materialistic values conflict with the spiritual teachings of Chandler ("You still have a single-fin-mentality"). The film climaxes with a surf contest on the Banzai Pipeline as Rick ends up competing against Lance in a duel of skills and beliefs. During the final round, Lance cheats by pulling on Rick's leash, causing him to wipeout. Chandler, initially hostile towards competitive surfing, is outraged, but Rick reminds him that it wasn't about winning, but going the distance.

As Rick prepares to leave for college in New York, he thanks Chandler for his friendship and lessons. While waiting for his flight, Rick is greeted by Turtle and Kiani. He shares a goodbye kiss with Kiani, and Turtle shows Rick a newspaper catching Lance in the act, who was disqualified. Rick promises to come back to the North Shore.