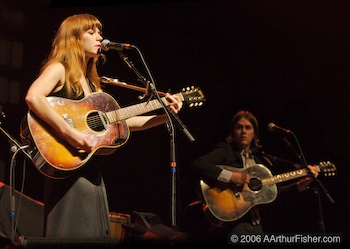 Jenny Lewis and the Watson Twins opened the show Wednesday night to a sold out crowd. The audience sat with a gleeful appetite, soaking up the diva's modern version of a classic style. The music was fresh yet nostalgic, with an old-school rock 'n roll and a splash of country. The Nancy Sinatra-like lyrics were confident and clean, commanding attention from all onlookers. 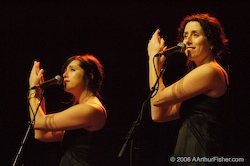 Lewis was backed-up by an outstanding mix of talented musicians, including Rilo Kiley's Jason Boesel on drums, Farmer Dave on steel guitar and keyboards, Jonathan Rice on guitar and of course, the beautiful Watson Twins. The twins sang along with harmonious backup vocals, matching each other in costume and in step. Lewis and the twins cut out after a few songs and {mosimage}returned in retro-style, coordinated outfits which must have been influenced by go-go dancers of the 60's. All in all, the opening set was a real treat.

Death Cab for Cutie came out with a bang, filling the first few rows with the onslaught of charging & screaming, die-hard fans. I was smashed against the stage for the duration of my standard three song photo shoot. The entire venue came alive as the band unseated most all of the theater for the entire show. The mop-top musicians danced away on stage, working up a sweat of their own as they thrashed around their groovy hairdos

Lead singer and guitarist, Ben Gibbard was a real crowd-pleaser, showing off his dynamic range with his bugle-like, silky voice. Nick Harmer thumped away on his bass, never missing a beat. The show ended with a smashing drum set, including Gibbard playing on a little electric, two-pad kit up at the front of the stage. The top-hit producing group drew an awkwardly ecclectic audience, thrilling everyone from young teens up to a surprisingly older generation. 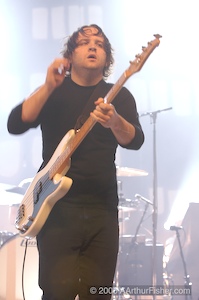