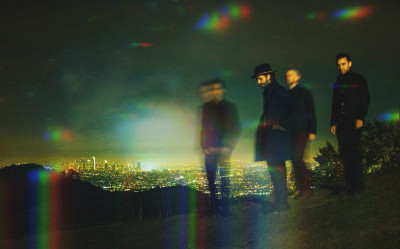 
Lord Huron was created by Los Angeles-based Ben Schneider. Born and raised in Michigan, Schneider drew inspiration from the Great Lakes, which were carved by glaciers 14,000 years ago, and his music stands in awe and wonder of the natural world.

After writing and recording two independent EPs (Into the Sun and Mighty) on his own, demand grew for Lord Huron to perform live. Schneider recruited friends Mark Barry (percussion), Miguel Briseño (bass) and Tom Renaud (guitar). Having first played music together at the tender age of 12, the group reunited and quickly hit their stride, transforming the project into a full-fledged band. Lord Huron signed with IAMSOUND, and the label released 2012’s Lonesome Dreams, and Strange Trails in 2015.

Lord Huron has toured extensively in North America and Europe, earning rave reviews and performing for sold-out crowds at some of the world’s most prestigious venues. The band has appeared at a wide range of music festivals including Lollapalooza, Coachella, Bonnaroo and Newport Folk Festival.