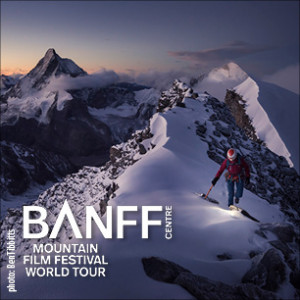 GOOD MORNING 2018, France, 4 minutes / Filmmaker: PVS Company; Maxime Moulin, Antoine Frioux, Richard Permin Every day, skier Richard Permin falls into his mundane morning routine. Right after getting out of bed, he clicks on his skis and rides down the snow-covered rooftops of Avoriaz.

CAMEL FINDS WATER 2019, US, 9 minutes / Filmmaker: Ian Durkin and Trevor Gordon Trevor found the hull of an abandoned fishing boat in a field. He brought it home and built it back to a sea-worthy state over the course of a summer. Then, he took it on its maiden voyage to British Columbia in search of waves.

THE IMAGINARY LINE 2019, USA, 11 minutes / Filmmaker: Kylor Melton In an act of political solidarity, a team from Mexico and the U.S.A assemble with the sole purpose of establishing a slackline that crosses the border between them. In a world that is constantly tearing us apart, they come together to cross an imaginary line and tell a different story.

CHARGE 2019, Canada, 5 minutes / Filmmaker: Mike Douglas, Mike Gamble, Anthony Bonello Four top freeskiers and a World Champion drone pilot are dropped at Chatter Creek, BC for one week. Their instructions: charge as hard as you can everyday.

A NORDIC SKATER 2018, Lithuania, 5 minutes / Filmmaker: Paulius Neverbickas The story of a man who uses every sense he has to travel on thin ice while Nordic skating in the Oslo region of Norway. He tells the story of how the little known sport of Nordic skating came to play a big part in his life.

ELECTRIC GREG 2019, Canada, 5 minutes / Filmmaker: Mike Douglas, Mike Gamble, Anthony Bonello Having seen the affects of climate change first-hand, Greg Hill sets out to climb 100 peaks without burning any fossil fuels. But the question is: will it make a difference?

REEL ROCK 13: UP TO SPEED 2018, USA, 20 minutes / Filmmaker: Peter Mortimer, Zachary Barr, Nick Rosen (Sender Films) When climbing was announced as part of the 2020 Olympics, it was a monumental occasion for the sport. But many climbers were shocked to learn that one of three combined events required to compete for a medal is… speed climbing.

DANNY DAYCARE 2019, UK, 4 minutes / Filmmaker: Cut Media, Stu Thomson In his latest film Danny MacAskill takes on some child care the only way he knows how... by taking them for a wee bike ride around Scotland!