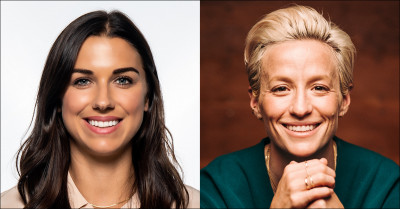 
A Conversation with Soccer Superstars

Soccer superstars Alex Morgan and Megan Rapinoe are an irresistible force, both on and off the field. Powerful, playful and inspiring, the U.S. Women’s National Team co-captains led their squad to a monumental victory at this summer’s FIFA Women's World Cup. Rapinoe was awarded the tournament’s Golden Ball as its best player and the Golden Boot as its top goal-scorer, while Morgan has become one of the most prolific goal scorers in U.S. soccer history. With their tremendous victory in the record books, Morgan and Rapinoe are applying their sway and swagger beyond the field, creating a groundswell of support for women athletes and equality across the globe.