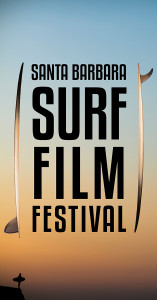 Two Day Passes will be available for pickup the week of the festival at the Arlington Box Office.

-November 8th, 2019 kicks off the first of the two-day festival this November. Films will be showcased at the celebrated Arlington Theater on State Street, with additional events scheduled throughout Santa Barbara.

Two-Day Passes will give you priority seating to all surf films. 2-Day Pass will need to be exchanged at the Arlington Box Office for a wristband on the day of the event.

One-Day Passes allows you access to all film screenings on a single day before General Admission individual ticket holders. One-Day Passes will be available for pickup the week of the festival at the Arlington Box Office. One-Day Passes are Will Call Only. Must arrive 30 minutes before showtime.

The Santa Barbara Surf Film Festival’s all-star team represent both the surf and film worlds. The goal of the festival is to create a comprehensive celebration of surf filmmaking that honors the diverse storytelling styles of the filmmakers. Artists and attendees will have a rich experience that we will build on well into the future.

Scheduled events include pre-and-post film discussions with Q and A's. Details on additional exhibits, panels, parties, and festival-related activities are being finalized and will be released over the upcoming weeks.

Santa Barbara’s rich tableau of surf culture plays an influential role in the international surf scene, attracting visitors from all over the world. The Santa Barbara region is home to many famous pro surfers, board shapers and niche surf brands, which makes it the ideal location to host this immersive event

A Corner Of the Earth

A Corner of the Earth is a cinematic exploration of surfing in the brutal northern winter featuring aspiring professional surfer Fraser Dovell who is struggling with the harsh realities of competitive surfing. Along with filmmaker Spencer Frost and photographer Guy Williment, Fraser comes to a new appreciation of what it means to be a surfer.

The year is 1992 and Billabong filmmaker Jack McCoy has just released Green Iguana. Surfers’ minds are blown. Filmed in West Oz, the Mentawais and Hawaii. Green Iguana has been described as one of the most creative surf movies of all time and is an integral piece of any surf film archive.

Litmus was the first surfing film by Andrew Kidman. Dubbed the surf film of the 90’s. This cult video features some great footage of surfing legends like Miki Dora, Wayne Lynch, Tom Curren In 1995 Jon Frank and Andrew Kidman embarked on a Journey. They documented their travels and when they returned home, they made Litmus.

From surfing innovations to gritty localism, follow the rise and fall of The Westsiders surf gang through the eyes of three best friends from the original ‘Surf City’: Santa Cruz, California. Best friends Daryl ‘Flea’ Virostko, Shawn ‘Barney’ Barron, and Jason ‘Ratboy’ Collins bonded by common tragedy and their love of surfing. They live through shattered homes, drug addiction, other psychological issues and hard-core localism to achieve their dream of becoming professional surfers before the age of 24. To surf the notorious Steamer Lane, they had to join ‘The Westsiders’ Surf Gang and go face to face with Vince Collier, aka ‘The Godfather of The Westside’. Vince, a massive brute force, ran Steamer Lane with his own version of street justice.

Lisa Andersen is one of surfing’s few transcendent stars. 4x world champ and inductee into the Surfer Hall of Fame, she is a true surf icon. But this is not a story about surfing. It’s the story of a woman brave enough to be vulnerable.

And Two if By Sea

Coming from nothing, the Hobgood’s brotherly antagonism pushed the other to becoming two of the most iconic professional surfers in the world. A cinematic tale of fate, destiny, and family. Though two distinct people with two separate identities, in the late 90s and early 2000s CJ and Damien, identical twins, were almost given a collective identity – referred to simply as “The Hobgoods.” What that does to two highly competitive surfers eager to tear away from their brother’s shadow is the subject of a new documentary that’s six years in the making.

Spoons is a documentary about craft, heritage, and place. It chronicles the history of surfing from a little corner of California where perfectly groomed lines wrap around a cobblestone point to form Rincon, one of the best waves on earth. From the performance focused design of the Yater Spoon and George Greenough’s radical innovation, rose the world’s largest surfboard manufacturer and the modern surf industry as we know it. Their influence gave rise to the world’s best surfers and still resonates to this day. It’s a Santa Barbara Story.

Lost in Thought / The Cuba Unknown

The film highlights the transformative power of surfing and the importance of finding good waves in Cuba. Following Frank and Yaya as they search the country for potential surf spots to help demonstrate the sport’s viability to the Cuban government, it shares a great first look at surfing in Cuba.

A new surf video featuring the next generation of up & coming surfers shot in California, Panama, Portugal, Mexico…etc Hunter Martinez has released his debut surf film, Lost in Thought. As is becoming the norm these days, this film was created primarily from personal resources (read: no sponsor dollars). Because of that fact, this film has a free and easy edit style which allows for a nice flow. No counting waves to make sure the brand got it’s due, LIT has roots of inspiration from classic films of the past while focusing on a young, up and coming crew of today, featuring Borland, Osborne, and Day, among others.

“The Boatmaker” is the story of architect Ken Minor who spent 25 years building a beautiful wooden sailboat in a barn next to his house in a California canyon inspired by the dream of sailing around the world.

The crown jewel to ten years of Bruce Brown surfing documentaries. Brown follows two young surfers around the world in search of the perfect wave, and ends up finding quite a few in addition to some colorful local characters.

The 1969 Union Oil blowout mobilized the Santa Barbara community to fight for the environment, inspiring the creation of many nonprofit organizations, Earth Day, the Environmental Protection Agency and the first interdisciplinary Environmental Studies program. The legacy of the oil spill continues to inform this community, which keeps coming together, providing local solutions to global environmental problems, exemplified when over 3,000 volunteers joined the Santa Barbara Bucket Brigade to dig mud from homes after the deadly 2018 debris flow

BETHANY HAMILTON: UNSTOPPABLE tells the story of surfer Bethany Hamilton, who at age 13 was out surfing when she was attacked by a 15-foot tiger shark, a run-in that cost Hamilton her left arm. But not only did Hamilton survive the attack, she was back on the competitive surfing circuit less than a year later. More than a decade later, Hamilton, now a mother, undertakes her greatest challenge: chasing a toddler and the biggest wave of her career.

BUNKER77 is the wild true story of a young American rebel seeking freedom, love, and authenticity in a chaotic world. Bunker Spreckels, Clark Gable’s stepson and heir to a sugar fortune, turned his back on expectations and grew into a controversial surf star who expressed complete originality, like a cross between James Dean and Andy Warhol. He danced on the sea like no one else even as his mysterious and surreal persona exploded to consume him.

A cinematic depiction of plasmatic destruction featuring Bruce Irons, Shawn Barron, Gavin Beschen, Tai Vandyke, and Dave Post. This film is 100% hand made from start to finish with a scrumptious soundtrack. It’s is a surreal surf journey through the mind of Bruce Irons while cooking breakfast. A classic piece of art for every surfer to enjoy.