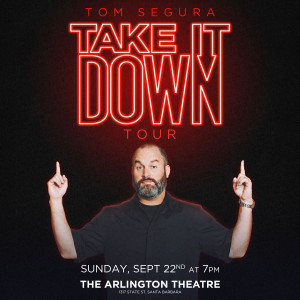 
Today, Tom Segura announced he will bring his Take It Down Tour to The Arlington Theatre in Santa Barbara on September 22 at 7:00 PM. The Goldenvoice presale begins Thursday, April 11 at 10:00 AM until 10:00 PM with the password ROADTRIP. The general onsale begins Friday, April 12 at 10:00 AM via AXS.com.

Segura has risen to be one of the top comedy theater acts in the country. He also continues to perform at the top comedy festivals in the world, including Montreal’s Just For Laughs Comedy Festival, The Melbourne International Comedy Festival, The Comedy Festival - Las Vegas, The South Beach Comedy Festival, and The Hong Kong Comedy Festival. Segura has an increasing social media following (@seguratom on IG) and also regularly appears on radio shows like the Bennington Show and some of the most downloaded podcasts in the world of comedy such as The Joe Rogan Experienceand WTF with Marc Maron among others. His fourth hour-long stand up album Mostly Stories sat atop the iTunes and Billboard Comedy charts for consecutive weeks and his first two albums Thrilled and White Girls with Cornrows debuted at number 1 and continue to play heavily on satellite radio and streaming music platforms. When he isn’t performing on stage or recording a podcast he’s watching College Football or waiting for College Football to come back. Segura is originally from Cincinnati, Ohio and currently lives in Los Angeles.