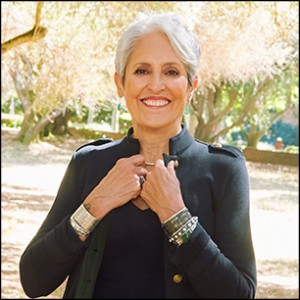 “What has given my life deep meaning, and unending pleasure, has been to use my voice in the battle against injustice.” – Joan Baez

Shortly after her 2017 Rock & Roll Hall of Fame induction, Joan Baez announced, “While 2018 will be my last year of formal, extended touring, I’m looking forward to being on the road with a beautiful new album about which I am truly proud.” The new album, Whistle Down the Wind, gathers material by some of Baez’s favorite composers, from Tom Waits and Josh Ritter, to Eliza Gilkyson and Mary Chapin Carpenter. A musical force of nature of incalculable influence, Baez’s earliest recordings fed a host of traditional ballads into the rock vernacular, before she unselfconsciously introduced Bob Dylan to the world in 1963. That tradition of mutual mentoring continues on, and will reverberate long into the future across her lifetime of recordings.