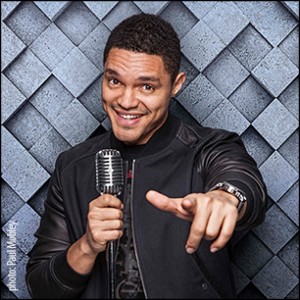 
“His comedy is political, trenchant, delivered in an easy style that probes sensitive subject matter without being overtly confrontational.” Newsweek

Trevor Noah was catapulted into the international spotlight when he was selected to fill Jon Stewart’s shoes as host of The Daily Show, becoming one of today’s favorite comics. Raised in post-apartheid South Africa, Noah brings a unique perspective to his stories and hit comedy specials, including Afraid of the Dark, Lost in Translation andAfrican American, and his award-winning memoir, Born a Crime: Stories from a South African Childhood. “A cultural chameleon who has learned to mine his surroundings as much for survival and human connection as for comedy” (Newsweek), Noah’s incisive humor slips from jokes to earnest insights for a moving, thought-provoking and hilarious experience.

For tickets and more information, call UCSB Arts & Lectures at (805) 893-3535 or visit www.ArtsAndLectures.UCSB.edu