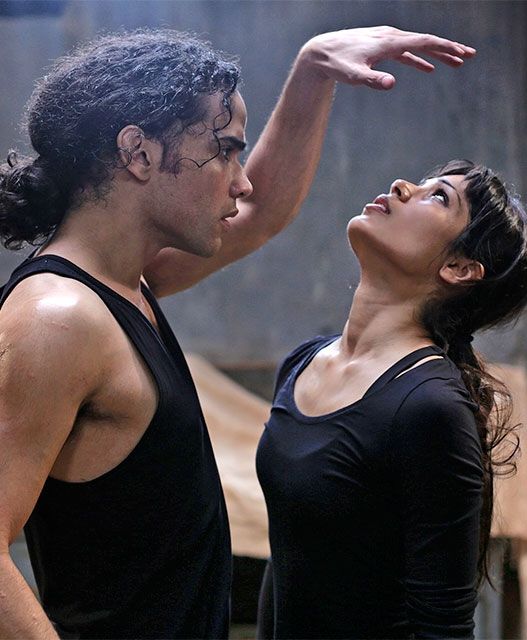 "Raymond has delivered an extremely timely and thought-provoking movie about love, truth and the freedom that comes from following your passions," stated Roger Durling, SBIFF Executive Director. "What better way to kick off our 30th anniversary!"

For the first time in 5 years, the SBIFF will present the Attenborough Award For Excellence in Nature Filmmaking to the Cousteau Family – Jean-Michel and his son and daughter Fabien and Celine -- for their decades-long commitment to educating the public and discovering the mysteries of the ocean. The award will be presented on Wednesday, January 28, 2015 at the Arlington Theatre.

Said Durling, "The name Cousteau is synonymous with ocean exploration and preservation, something the Santa Barbara community is equally passionate about. Acknowledging them for their dedication to continue their mission through action and education is both an honor and a privilege."

Desert Dancer is a powerful and unbelievable true story set in Iran that follows the brave ambition of Afshin Ghaffarian. During the volatile climate of the 2009 presidential election, where many cultural freedoms were threatened, Afshin and some friends (including Elaheh played by Freida Pinto) risk their lives and form an underground dance company. Through banned online videos, they learn from timeless legends who cross all cultural divides, such as Michael Jackson, Gene Kelly and Rudolf Nureyev. Afshin and Elaheh also learn much from each other, most importantly how to embrace their passion for dance and for one another. Richard Raymond directs the film, which was written by Jon Croker, based on the life story of Afshin Ghaffarian. The film, starring Freida Pinto, Reece Ritchie, Tom Cullen, Nazanin Boniadi and Makram J. Khoury, will be released by Relativity Studios in select cities on March 20, 2015 and expanding on March 27, 2015. For more information about the movie, like them on Facebook at facebook.com/desertdancerthemovie.

Jean-Michel Cousteau, son of ocean explorer Jacques Cousteau, and his children Fabien and Celine have dedicated their lives to protecting and preserving the planet's extensive and endangered marine life. Together they participated in the PBS series, "Ocean Adventures" from 2006 – 2010. The show, inspired by Jacques Cousteau's famous television series "The Undersea World of Jacques Cousteau," provided viewers with a unique look into some of the most astounding marine species and environments on the planet. Individually, they have all continued to fulfill the family legacy.

Jean-Michel Cousteau has reached millions of people globally through Ocean Futures Society, a non- profit marine conservation and education organization he founded in Santa Barbara in 1999. The organization serves as a "Voice for the Ocean" by inspiring and educating people to act responsibly for its protection. Having produced over 80 films, and being a syndicated columnist for different news and dive publications, Jean-Michel has used the power of media to spread awareness of the Ocean. Jean-Michel's most recent film, his first IMAX®, "Secret Ocean 3D," is due to premiere in March 2015. He has also been involved in ecotourism at different locations around the world, including the Jean-Michel Cousteau Fiji Islands Resort since 1995 and most recently at Petit St. Vincent in the Grenadines. All his ecotourism projects strive to implement energy conservation, waste management, and water conservation, establish nature reserves, restore local coastal habitats, provide environmental education for the guests and to the local schools, and much more.

Fabien Cousteau, uses his experience in the field and applies his knowledge to help clarify that environmental discipline can be the basis for cutting-edge solutions that strike a balance between global environmental problems, and the realities of market economies. Fabien is an active member of multiple cause-driven and charitable organizations. Fabien is currently working on a feature documentary film and book documenting the adventures of "Mission 31," in which Fabien broke new ground in ocean exploration living 63 feet below the ocean's surface, honoring the 50th anniversary of his grandfather's original underwater living experiment by going deeper, longer and further, while broadcasting each moment live, exposing the world to the adventure, educating the public in a fun and interesting way.

Celine Cousteau is the founder and executive director of CauseCentric Productions, a non- profit organization that creates cause-focused multi-media content. She is a member of the World Economic Forum Council on Oceans, having consulted with and acted as spokesperson for several companies on their conservation efforts. She strives to reconnect people with the natural world through education and awareness using various art forms such as photography, film and speaking to audiences all over the world. Celine's most recent project is a multimedia engagement campaign, "Tribes on the Edge," which is based on the indigenous tribes of the Vale do Javari reserve in the Brazilian Amazon. With a documentary at its core, this international campaign includes a variety of supporters, from a world renowned chef to an eco-conscious designer. They are seeking application for UNESCO Biosphere Reserve status to include the tribal territory of the Vale do Javari.

The Santa Barbara International Film Festival, presented by UGG® Australia, will celebrate its 30th Anniversary January 27 – February 7, 2015. Dedicated to discovering and showcasing the best in independent and international cinema, SBIFF will offer 12 days of 200+ films, tributes and symposiums that range from American indie films to world cinema and everything in-between. With its commitment to cultural diversity and powerful storytelling, SBIFF transforms beautiful downtown Santa Barbara, CA into a rich destination for film lovers, attracting more than 85,000 attendees. SBIFF brings to the forefront the importance and power of the art of filmmaking and continues its commitment to providing free children's education and community outreach programs through its 10-10-10 Student Filmmaking and Screenwriting Competitions, Mike's Field Trip to the Movies, AppleBox Family Films, 3rd Weekend and educational seminars. To purchase or for more information, log onto www.sbfilmfestival.org or call 805-963-0023.