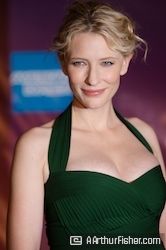 Santa Barbara, CA – The Santa Barbara International Film Festival is proud to present the 2014 Outstanding Performer of the Year Award to Academy Award winning actress Cate Blanchett on Saturday, February 1.  She will be honored with a Tribute celebrating her compelling performance in Woody Allen’s Blue Jasmine at the 29th edition of the Festival, which runs January 30 – February 9, 2014, it was announced today by SBIFF Executive Director Roger Durling.

“In her first collaboration with master director Woody Allen, Blanchett knocks it out of the park in the best performance of her already illustrious career,“ remarked Roger Durling, SBIFF Executive Director.  “We’re so grateful to be able to celebrate her achievement.”

Blanchett will be honored for her stellar performance in this year’s Blue Jasmine, in which she portrays Jasmine French, a deeply conflicted and complex woman in the throes of her world unraveling.  The imploding of her life has far-reaching effects on those around her, leaving the audience to wonder if everyone can heal and move forward.  Jasmine is tragically flawed and with Blanchett at the helm, we feel Jasmine’s pain and experience her journey.

The arsenal from which Blanchett hones her talent has allowed her the opportunity to portray a wide range of personalities in films by some of the most esteemed directors.  Those films include Shekhar Kapur’s Elizabeth, for which she received her first Oscar nomination for Best Actress, Mike Newell’s Pushing Tin, Anthony Minghella’s The Talented Mr. Ripley, Barry Levinson’s Bandits, Lasse Hallström’s The Shipping News, Peter Jackson’s The Lord of the Rings trilogy, Joel Schumacher’s Veronica Guerin, Martin Scorsese’s The Aviator (for which Blanchett won the Academy Award for Best Supporting Actress for her portrayal of Katharine Hepburn), Alejandro Gonzalez Inarritu’s Babel, Richard Eyre’s Notes on a Scandal, for which she received her second Oscar nomination, and David Fincher’s The Curious Case of Benjamin Button, to name just a few.  Blanchett received two Oscar nominations in 2008, as Best Lead Actress for Elizabeth: The Golden Age, giving her the distinction of being one of only five actors (and the only female actor) in Academy history to be nominated for an Oscar twice for playing the same role in two separate films, and as Best Supporting Actress for I’m Not There, further distinguishing her as one of eleven actors to have been nominated in both acting categories in the same year.  Blanchett will next appear in The Monuments Men.

The Santa Barbara International Film Festival runs January 30 – February 9, 2014. The Outstanding Performer of the Year Award will be presented at the historic Arlington Theatre on Saturday, February 1, 2014. Tickets are available now and can be purchased through www.sbfilmfestival.org or by calling 805-963-0023. Festival Passes and Packages are still available and sold exclusively at www.sbfilmfestival.org and 805-963-0023.