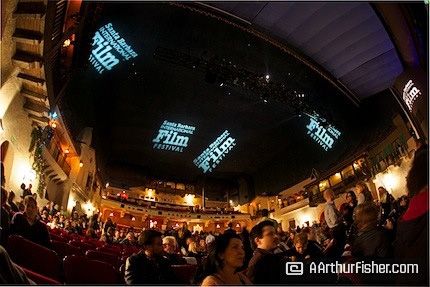 Santa Barbara, CA - The 28th Annual Santa Barbara International Film Festival, presented by lynda.com, announced the winners of the 2013 festival competition at a Press Conference and Brunch Sunday morning at the Fess Parker – A Doubletree by Hilton Resort. To the delight of patrons and industry professionals, the festival's 28th season continued the tradition of presenting purely exceptional films, spanning genres and topics that surpass anything before. Throughout the 11 days, cinephiles from around the globe packed the theaters of State Street, creating one of the most vivacious periods the area has ever seen.

Commented SBIFF Executive Director Roger Durling, "Eleven days ago at the start of the festival, I encouraged the audience to treat the experience as an adventure and really explore what our films have to share. Ranging from Reel Nature to International Features, I am proud to say that our selection of films have both challenged and been embraced by audiences. Once again, this year's festival surpassed previously achieved goals in the quality of the films and the attendance of our audiences."

The Panavision Spirit Award for Independent Cinema, given to a unique independent feature that has been made outside mainstream Hollywood, went to BABYGIRL, directed by Macdara Vallely.  A Puerto Rican girl in the Bronx sets a trap to expose her mother's boyfriend as the creep she thinks he is. Winner received a Panavision camera package worth $60,000.

The Best International Film Award went to COMING OF AGE (Anfang 80), directed by Gerhard Ertl and Sabine Hiebler. At age 80, two people prove beyond all doubt that nobody is too old for young love.

Jurors Pamela Gray and Anthony Zerbe chose Coming of Age "because of the stunning performances of lead actors Christine Ostermayer and Bruno Merkatz.  It's a beautifully written screenplay that skillfully combines a passionate love story between two eighty-year-olds with a sobering look at the ways we devalue and dismiss the elderly. It was funny, charming, heartbreaking and ultimately uplifting."

The Nueva Vision Award for the best Spanish/Latin American film was awarded to 7 BOXES (7 Cajas), directed by Juan Carlos Maneglia and Tana Schembori. A teenage delivery boy working in a Paraguayan market must dodge thieves, rival gangs and the police when he agrees to transport seven mysterious — and highly sought-after — crates to the edge of town.

Jurors Debra Martin Chase and Roger Hedden chose this film "because in a nutshell, it was sly, funny and humane."

Jurors Phyllis de Picciotto and Mimi deGruy said "Using innovative cinematography and compelling storytelling, More Than Honey highlights the issue that threatens our very survival: man's attempts to control and dominate nature. This well-crafted film looks at the endangered honeybee around the world."

The Bruce Corwin Award for Best Live Action Short Film Under 30 Minutes went to BARRIERS, directed by Golan Rise. Uri and two soldiers are manning a checkpoint in the territories. Two women from the "watch" organization try to interfere. Amidst the women's screaming, Uri receives an order to close the checkpoint because of a bomb threat.

Bruce Corwin Award for Best Animation Short Film went to SLEIGHT OF HAND, directed by Michael Cusack. Sleight of Hand: techniques used to manipulate objects to deceive. In this stop-motion film about illusions, a man sculpts a clay image of himself.

Jurors Ralph Macchio and Claudia Puig chose Sleight of Hand, which also won the Animation Film Festival, not only for the high level of visual stop action, but because of the ability of filmmakers to capture such emotion and sympathy for the lead character. They were impressed with the visual world created and moved by the journey.

Barriers was chosen for its suspenseful pace, as well as the conflict for many of the characters. The filmmakers created a tense documentary-like feel that fit the genre and embraced the surrounding elements.

The Fund for Santa Barbara Social Justice Award Sponsored by The Fund for Santa Barbara for a documentary film that addresses social justice issues also went to REVOLUTION, directed by Rob Stewart and executive produced by Gus Van Sant.  This outstanding documentary makes an impassioned, angry and enduringly hopeful call to arms against our destruction of our planet's precious marine life. The winner receives $2500.

The Audience Choice Award, sponsored by The Santa Barbara Independent, went to SPINNING PLATES, directed by Joseph Levy. This documentary features three restaurants (including French Laundry and Chicago's Alinea), extraordinary for what they are today as well as for the challenges they have overcome.

The results of the 10-10-10 filmmaking competition will be announced at the closing night festivities.

The festival closes tonight with the U.S. Premiere of WASTELAND, directed by Rowan Athale. In this exhilarating heist thriller, a young ex-con hooks up with his best mates to embark on a wild - and risky - revenge scheme after being framed by a local drug kingpin. Director Athale will attend along with cinematographer Stuart Bentley.