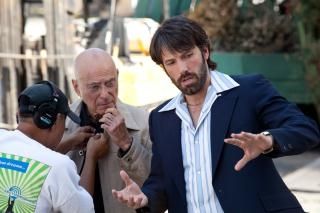 Santa Barbara, CA- The Santa Barbara International Film Festival, presented bylynda.com, will honor director, producer and actor Ben Affleck with the Modern Master Award at the 28th edition of the Fest, which runs January 24 -February 3, 2013, it was announced today by SBIFF Executive Director Roger Durling.  The Tribute will take place on Saturday, January 26, 2013 at the historic Arlington Theatre.

“Affleck has come into his own as a multi-dimensional artist with ARGO,” commented SBIFF Executive Director Roger Durling.   “He embodies what the Modern Master Award is all about, and we're thrilled to honor him this year."

Affleck will be honored for his work this year as the director, star and producer of the critically acclaimed film Argo. He has proven to be a master of his craft withArgo, receiving acclaim from both critics and audiences.  Skillfully capturing the tension brought upon by the subject matter, Affleck uses the film’s pacing and tone to enhance it to its greatest potential. Based on true events, the film chronicles the life-or-death covert operation to rescue six Americans, which unfolded behind the scenes of the 1979 Iran hostage crisis.  The film stars Affleck, Bryan Cranston, Alan Arkin, John Goodman, Victor Garber, Tate Donovan, Clea DuVall, Scoot McNairy, Rory Cochrane, Christopher Denham, Kerry Bishé, Kyle Chandler and Chris Messina.  Based on a screenplay by Chris Terrio, the film is produced by Grant Heslov, Affleck and George Clooney.

Driven to act from a young age, Ben Affleck began by taking on small roles and independent films including Dazed and Confused (1993), Mallrats (1995), and Chasing Amy (1997). It was later in 1997 that he broke through to critical acclaim with Good Will Hunting, which he co-wrote and starred in alongside Matt Damon. His work won him the Academy Award® for Best Original Screenplay.  Following this success, Affleck proceeded to take on a variety of roles in such hit films Armageddon (1998), Shakespeare in Love (1998), and Dogma (1999). In addition to flexing his comedy and romance muscles, Affleck also showed his grittier side in such films as Reindeer Games (2000), Pearl Harbor (2001), The Sum of All Fears (2002), Daredevil (2003) and Hollywoodland (2006).  In 2007, Affleck stepped behind the camera to make his feature film directorial debut with the film Gone Baby Gone, which he also wrote. After acting in several films such as State of Play (2009) and The Company Men (2010), Affleck returned to directing with the critically acclaimed The Town (2010).

The Santa Barbara International Film Festival is dedicated to discovering and showcasing the best in independent and international cinema. Now in its 28th year, The SBIFF has expanded to feature 11 days of 200+ films, tributes and symposiums that range from American indie films to world cinema and everything in-between.  With its commitment to cultural diversity and powerful storytelling, SBIFF transforms beautiful downtown Santa Barbara, CA into a rich destination for film lovers that last year alone attracted more than 70,000 attendees. SBIFF brings to the forefront the importance and power of the art of filmmaking and continues its pledge to further its education initiative through its 10-10-10 Student Filmmaking and Screenwriting Competitions, “Field Trip to the Movies” program and educational seminars.   This year’s presenting sponsor is lynda.com. The festival is set to run January 24 – February 3, 2013. For more information, please visit www.sbfilmfestival.org.