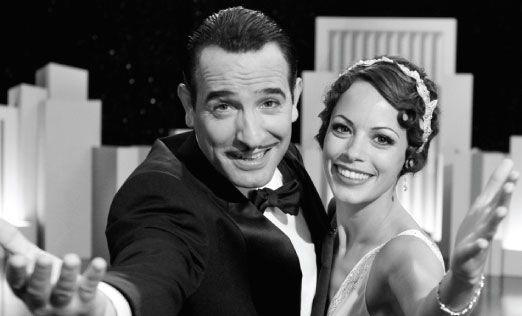 The Santa Barbara International Film Festival presented by lynda.com will bestow Jean Dujardin and Bérénice Bejo with the Cinema Vanguard Award on Saturday February 4, 2012. The actors will be honored for their performances in the silent film The Artist with a tribute at the Arlington Theatre at the 27th edition of the Festival which runs January 26 - February 5, 2012, it was announced today by SBIFF Executive Director Roger Durling.

The Cinema Vanguard Award was created in recognition of an actor who has forged his/her own path - taking artistic risks and making a significant and unique contribution to film. The award has previously been presented to Nicole Kidman,Christoph Waltz, Vera Farmiga, Stanley Tucci, Peter Sarsgaard, Kristin Scott Thomas and Ryan Gosling.

“In an age of sight and sound spectacle, there is great risk in a silent film,” comments Roger Durling.  “Jean and Bérénice's acting is an amazing pas des deux both physically and emotionally - recalling classic Hollywood pairings like Hepburn and Tracy, and of course indelibly Ginger and Fred."

Dujardin remarked, “We are grateful to the Santa Barbara International Film Festival for this incredible honor.  Delivering a silent film to the 21st century is no easy task, and it would have in no way been possible without the talent and dedication of the incredible ensemble of actors we had the pleasure of working with:  James Cromwell, John Goodman, Penelope Ann Miller, Missi Pyle and Malcolm McDowell.  This award is just as much for them as it is for us.”

Dujardin and Bejo are currently receiving wide praise for their lead performances in The Artist, directed by Michel Hazanavicius. In late 1920’s Hollywood, many actors witnessed the decline of their careers with the rise of the talking picture. This is just the case for silent film superstar George Valentin (Dujardin), who crosses paths with rising starlet Peppy Miller (Bérénice Bejo). Resistant to the conversion, Valentin is faced with the demise of his career while Miller embraces it and emerges a star. Through his performance, Dujardin offers a striking portrayal of the silent era male superstar, packed with the conviction and suave on par with the likes of Rudolph Valentino. No sooner does Peppy Miller enchant fictional audiences, than does Bejo with the real, through her pure charm and genuine charisma. Together Dujardin and Bejo’s masterful talent, make for one of the most compelling stories in film.

Born in Rueil-Malmaison, France, Jean Dujardin got his break on the talent show Graines de Star in 1996 as part of the comedy group Nous C Nous. Following he went on to star as Jean 'Loulou' in the comedy television series Un Gars, Une Fille from 1999 to 2003. Continuing in the realm of comedy, Dujardin broke onto the big screen as aspiring surfer Brice Agostini in The Brice Man (2005). 2006 marked Dujardin’s first collaboration with Bejo through his role as Hubert Bonisseur de La Bath in the espionage film OSS117: Cairo, Nest of Spies. Dujardin reprised the role in 2009 for OSS 117: Lost in Rio.

Bérénice Bejo was born in Buenos Aires and moved to France at the age of 3.  Bejo got her start working in an assortment of French television shows. She landed her first recurring role as Sophie on the comedy series Un Et Un Font Six (1997-1999). American audiences were introduced to her when she appeared in 2001’s A Knight Tale as Christina. Bejo returned to French films acting in a number of films including her role as Larmina in OSS117: Cairo, Nest of Spies (2006) alongside Jean Dujardin.

The festivities will take place at the Arlington Theatre on Saturday, February 4, 2012. Tickets for the Cinema Vanguard Award are available now, discounted 15% until December 13, and can be purchased through www.sbfilmfestival.orgor by calling 805-963-0023. Festival Mini-Paks, Passes and Packages are currently discounted at 15% and on sale exclusively at www.sbfilmfestival.organd 805-963-0023.

The Santa Barbara International Film Festival, presented by lynda.com, is dedicated to the art of filmmaking, which seeks out and consequently offers a broad array of international and independent films, with a commitment to diversity. SBIFF, which attracts more than 70,000 visitors each year, endeavors to enrich the community both culturally and economically by presenting eleven days of films, tributes and symposiums, raising consciousness of film as an art form.  SBIFF presents quality American and world independent films, Latin American and French sidebars as well as documentary cinema within the beautiful setting of downtown Santa Barbara, a premier tourist destination.  SBIFF continues its commitment to education through its 10-10-10 Student Filmmaking and Screenwriting Competitions, Field Trip to the Movies, presented by The Academy of Motion Picture Arts and Sciences and educational seminars.  For more information, log onto www.sbfilmfestival.org.