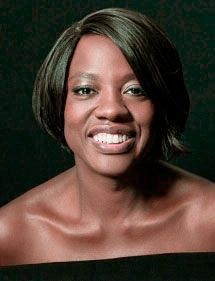 The Santa Barbara International Film Festival is proud to present award-winning actress, Viola Davis with the Outstanding Performer of the Year Award on Friday, January 27, 2012, sponsored by Chumash Casino Resort.  She will be honored with a Tribute celebrating her compelling performance in Tate Taylor’s The Help at the 27th edition of the Festival which runs January 26 - February 5, 2012, it was announced today by SBIFF Executive Director Roger Durling.

Davis captivated audiences and critics alike last summer with her portrayal of African American housemaid “Aibileen Clark.” Set in Jackson, Mississippi, during the 1960s, “The Help” chronicles the relationship between three different and extraordinary women who build an unlikely friendship around a secret writing project that breaks societal rules and puts them all at risk.Deeply moving, filled with humor, hope and heart, “The Help” is a timeless and universal story about the ability to create change.

Durling comments, "It's hard to imagine another performance this year that pierces your heart the way Viola does as Aibileen."

In 2008’s Doubt, Davis rendered audiences heartbroken with her performance as a troubled mother, forced to make a difficult decision to secure a future for her young son. Garnering wide critical acclaim, Davis’ work in the film solidified her as one of Hollywood’s most talented actors, and earned her nominations for an Academy Award®, Golden Globe® and Screen Actors Guild Award for Best Supporting Actress. Davis first landed on the big screen as a social worker in the Academy Award® nominated film Traffic. Shortly thereafter in 2002, Davis appeared in pivotal roles in Steven Soderbergh’s sci-fi drama, Solaris, opposite George Clooney, Far From Heaven, opposite Julianne Moore and Antwone Fisher which garnered Davis and Independent Spirit Award for “Best Supporting Actress.”

Demonstrating great versatility in her craft, Davis played a grandmother in 2005’s Get Rich or Die Trying and a community activist in The Architect (2006).  A stream of projects followed including roles in Tyler Perry’s comedy Madea Goes to Jail, and dramatic roles in State of Play,Law Abiding Citizen, Nights in Rodanthe andIt’s Kind of a Funny Story. Proving once again to hold her own amongst the Hollywood elite, Davis appeared alongside Julia Roberts in the big screen version of the bestselling novel Eat Pray Love (2010). Later this year, Davis will be seen in the highly anticipated Extremely Loud and Incredibly Close with Tom Hanks and Sandra Bullock. In March 2012, Davis stars in Won’t Back Down, alongsideMaggie Gyllenhaal and Holly Hunter.

The festivities will take place at the historic Arlington Theatre on Friday, January 27, 2012 in a tribute moderated by indieWIRE’s Anne Thompson.  Tickets for the Outstanding Performer of the Year, sponsored by Chumash Casino Resort, are available now and can be purchased through www.sbfilmfestival.orgor by calling 805-963-0023.  Festival Passes, Packages and Mini-Paks are currently discounted at 15% and on sale exclusively at www.sbfilmfestival.organd 805-963-0023.

The Santa BarbaraInternational Film Festival is dedicated to the art of filmmaking, which seeks out and consequently offers a broad array of international and independent films, with a commitment to diversity.   SBIFF, which attracts more than 70,000 visitors each year, endeavors to enrich the community both culturally and economically by presenting eleven days of films, tributes and symposiums, raising consciousness of film as an art form.  SBIFF presents quality American and world independent films, Latin American and French sidebars as well as documentary cinema within the beautiful setting of downtown Santa Barbara, a premier tourist destination.  SBIFF continues its commitment to education through its 10-10-10 Student Filmmaking and Screenwriting Competitions, Field Trip to the Movies, presented by The Academy of Motion Picture Arts and Sciences and educational seminars.  For more information, log onto www.sbfilmfestival.org.