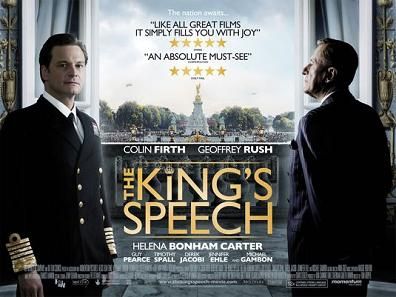 Colin Firth, Geoffrey Rush, Helena Bonham Carter and others to be honored at the 26th Annual Film Festival


January 23, 2011 — Santa Barbara, CA --  The 26th Annual Santa Barbara Film Festival will honor the cast of THE KING'S SPEECH as the best motion picture ensemble of the year, it was announced today by SBIFF Executive Director Roger Durling.  The film, which features performances by an award-winning collection of actors including Colin Firth, Geoffrey Rush, Helena Bonham Carter, Guy Pearce, Derek Jacobi and Claire Bloom, has garnered critical and industry-wide acclaim, recently winning the Producer's Guild of America's Best Picture of the Year Award.

The honor will be bestowed on Monday, January 31 at Santa Barbara's historic Arlington Theatre, as part of the 11-day film festival.  Firth, Bonham Carter and others are expected to attend the ceremony, along with the film's director, Tom Hooper, joining Geoffrey Rush at his Montecito Award Tribute.

"We are thrilled to not only recognize the extraordinary performance by Geoffrey Rush, but to be able to also celebrate Colin Firth and Helena Bonham Carter, two of our generation’s most incredible actors, as well as a Broadway and West End stage and screen legend like Claire Bloom who launched her career with Charlie Chaplin is a dream come true," remarked Durling.  Firth was honored for "Outstanding Performance of the Year" by the festival in 2010 for his work in "A Single Man."  Rush will be honored separately with the Montecito Award this year, moderated by Pete Hammond.

In an original screenplay by David Seidler THE KING’S SPEECH tells the real life story of how King George VI overcame a lifelong stuttering affliction with the help of the unconventional speech therapist-turned friend, Lionel Logue.  The film has shattered box office records in the UK and abroad posted a $90k per screen average domestically when it opened in LA/NY on Thanksgiving.  It is poised to expand nationally on January 29.