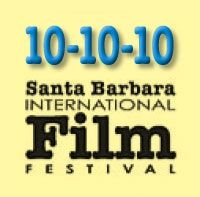 The Santa Barbara International Film Festival (which runs January 27-February 6) will present the 10-10-10 Student Filmmaking Competition for the eighth consecutive year. SBIFF will also continue the exciting 10-10-10 Student Screenwriting Competition which debuted in 2006. These events bring together student filmmakers and screenwriters with industry professionals in an effort to encourage and assist the next generation of filmmakers.

The Kick-Off for the contest is on Tuesday, January 25, at 2:00 p.m. with A PRESS CONFERENCE at the Canary Hotel.  Press is invited to cover; please RSVP to Rob Mankin: This email address is being protected from spambots. You need JavaScript enabled to view it.

The Screenwriting Competition sponsored by Business First Bank and Final Draft features 10 writers who were selected out of 31 submissions fromSanta Barbara high school and college students who submitted a 10-page sample of their best work – screenplay, stage play, or short story. The five best script samples were chosen from the high school level and five from the college level. The finalists were then assigned a storyline and an industry professional to mentor them during the writing of their screenplay. Finalists met with their mentor throughout the process.

The 10 student screenplays will be officially matched at the press conference with a category-appropriate filmmaking finalist from the 10-10-10 Student Filmmaking Competition. These 10 students, selected from 51 submissions, will direct a 10-minute film during the 10 days of the 25th Santa Barbara International Film Festival.

On Sunday, February 6, at 1:00 pm at the Lobero Theatre, the 10 films will be screened and judged on both filmmaking and screenwriting criteria. A winner in each of the competitions will be selected from both the high school and college levels. The winning films will be shown at the Closing Night festivities later that evening at the Arlington Theatre.

Finalists of the 10-10-10 Student Screenwriting and Filmmaking Competition sponsored by Business First Bank and Final Draft:

Artie Schmidt - Academy Award winning Editor, Forrest Gump, Who Framed Roger Rabbit, Coal Miner’s Daughter, Jaws 2, Back to the Future I,II andIII, The Last of the Mohicans, The Birdcage, and Pirates of the Caribbean: The Curse of the Black Pearl.