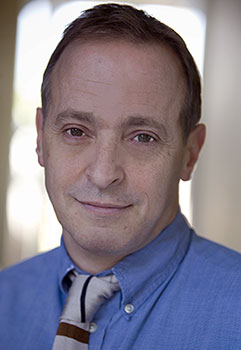 UCSB Arts & Lectures presents An Evening with popular humorist author David Sedaris, back by popular demand at the Arlington Theatre.

“One of the greatest humorists writing today.” - Chicago Tribune

UCSB Arts & Lectures presents An Evening with David Sedaris, back by popular demand on Monday, May 3 at 8 p.m. at the Arlington Theatre. One of America’s pre-eminent – and Santa Barbara’s favorite – humor writers Sedaris is the closest thing the literary world has to a rock star. The great skill with which he slices through cultural euphemisms and political correctness proves that Sedaris is a master of satire and one of the most observant writers addressing the human condition today. He will read from his collected works including selections from his forthcoming book, a collection of fables titled Squirrel Seeks Chipmunk: A Modest Bestiary (Oct. 5, 2010). Time Out New York raves, “David Sedaris just may be the funniest man alive.”

Unlike most writers, David Sedaris came to public prominence reading his work aloud. In 1992, his self admittedly high-pitched nasal whine brought NPR listeners “SantaLand Diaries,” his droll tale about working as an elf in New York City’s Macy’s. NPR’s Morning Edition subsequently received more mail about that essay than any piece it had ever aired. Offers from film and television came pouring in, but Sedaris continued to work cleaning apartments in New York by day and writing, as he still does, by night. In 1994, “SantaLand Diaries” ended up as the capstone piece in his first book, the bestselling Barrel Fever.

With sardonic wit and incisive social critiques, Sedaris has become one of America’s preeminent humor writers. A recipient of the Thurber Prize for American Humor, Sedaris is also the author of Holidays on Ice, as well as collections of personal essays, Naked, Me Talk Pretty One Day, Dress Your Family in Corduroy and Denim and When You Are Engulfed in Flames, each of which became a bestseller. There are a total of seven million copies of his books in print and they have been translated into 25 languages. He is the editor of Children Playing Before a Statue of Hercules: An Anthology of Outstanding Stories. Sedaris’s pieces appear regularly in The New Yorker and have twice been included in The Best American Essays. His newest book Squirrel Seeks Chipmunk (with illustrations by Ian Falconer) is due fall 2010.

David and his sister, Amy Sedaris, have collaborated under the name “The Talent Family” and have written half-a-dozen plays which have been produced at La Mama ETC, Lincoln Center, and The Drama Department in New York City. These plays include Stump the Host, Stitches, One Woman Shoe, which received an Obie Award, Incident at Cobbler’s Knob, and The Book of Liz, which was published in book form by Dramatists Play Service. David Sedaris’s original radio pieces can often be heard on This American Life, distributed nationally by Public Radio International and produced by WBEZ in Chicago. David Sedaris has been nominated for three Grammy Awards for Best Spoken Word and Best Comedy Album. His latest audio recording of new stories (recorded live) is “David Sedaris: Live for Your Listening Pleasure” (November 2009).

Courtesy of Borders, books by David Sedaris will be available for purchase and signing at the event.

An Evening with David Sedaris is presented by UCSB Arts & Lectures and sponsored by the Santa Barbara Independent, KCLU Public Radio, and the Four Seasons Biltmore. Arts & Lectures’ 50th anniversary season is sponsored by the Santa Barbara Independent and Cox Media. Admission is $25, $35, and $45 for the general public and $18 for UCSB students who must show a valid student ID. Ticket prices are subject to facility and convenience fees. American Sign Language interpretation will be provided at the event. For tickets or more information, call Arts & Lectures at 805.893.3535, purchase online at http://www.artsandlectures.ucsb.edu ; or call the Arlington Theatre at 805.963.4408.