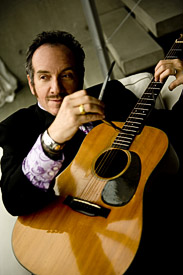 UCSB Arts & Lectures presents Elvis Costello Solo on Tuesday, April 13 at 8 p.m. at the Arlington Theatre, 1317 State Street, Santa Barbara. Grammy Award-winner Elvis Costello has followed his musical curiosity in a career spanning more than 30 years, from his well-known work with The Imposters and The Attractions to collaborations with renowned artists and musicians including Burt Bacharach and T Bone Burnett. On his Grammy-nominated new album Secret, Profane & Sugarcane, The Wall Street Journal raves, “he is solidifying a role as a journeyman of American music and one of its most high-profile curators.” Don’t miss the iconic host of the Sundance Channels’ popular music talk show Spectacle: Elvis Costello With…in a captivating solo performance.

Costello’s most recent album Secret, Profane & Sugarcane (Hear Music), produced by T Bone Burnett and recorded by Mike Piersante during a three-day session at Nashville’s Sound Emporium Studio, debuted at #13 on the Billboard 200 – his highest album chart position since 1980’s Get Happy. The album includes ten previously unrecorded songs. “Sulfur to Sugarcane” and “The Crooked Line” were co-written with T Bone Burnett, while “I Felt The Chill” marks Costello’s second recorded songwriting collaboration with Loretta Lynn. The album title makes reference to The Secret Songs, Costello’s unfinished commission for the Royal Danish Opera about the life of Hans Christian Andersen.

Costello’s songs have been recorded by a great number of artists that reflect his interest in a wide range of musical styles: George Jones, Chet Baker, Johnny Cash, Roy Orbison, Dusty Springfield, Robert Wyatt, Charles Brown, No Doubt, and Solomon Burke, among others. In 2003, he began a songwriting partnership with his wife, the jazz pianist and singer Diana Krall, resulting in six songs included in her highly successful album The Girl in the Other Room.

Costello has received several prestigious honors during his career, including two Ivor Novello Awards for songwriting, a Dutch Edison Award with The Brodsky Quartet for The Juliet Letters, the Nordoff-Robbins Silver Clef Award, a BAFTA for the music written with Richard Harvey for Alan Bleasdale’s television drama series G.B.H., and a Grammy for the song “I Still Have That Other Girl” from his 1998 collaboration with Burt Bacharach, Painted From Memory.

Elvis Costello and The Attractions were inducted into the Rock and Roll Hall of Fame in 2003. During the same year, Costello was awarded ASCAP’s prestigious Founder’s Award. There have also been several Grammy nominations for his recent albums When I Was Cruel and The Delivery Man; as well as an Oscar nomination for Best Song for “The Scarlet Tide,” co-written with T Bone Burnett and sung by Alison Krauss in the motion picture Cold Mountain.

Other recent collaborations include Costello’s first full-length orchestral work, Il Sogno, recorded by The London Symphony Orchestra and conducted by Michael Tilson-Thomas (Deutsche Grammophon) that stayed at the top of Billboard’s Contemporary Classical Charts for 14 weeks. In 2007, Costello completed the work “Nightspot,” a collaboration with world-famous choreographer Twyla Tharp commissioned by The Miami City Ballet. A new album with The Imposters titled Momofuku was recorded in secrecy in just seven days and was released in 2008.

Elvis Costello Solo is presented by UCSB Arts & Lectures and sponsored by the Santa Barbara Independent. Arts & Lectures’ 50th anniversary season is sponsored by the Santa Barbara Independent and Cox Media. Tickets are $86, $75, $58, and $39 for the general public and $25 for UCSB students who must show a valid ID. For tickets or more information, call Arts & Lectures at 805.893.3535, purchase online at http://www.artsandlectures.ucsb.edu/; or call the Arlington Theatre at 805.963.4408.