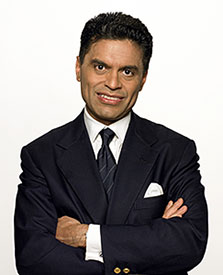 “The most influential foreign policy adviser of his generation.” - Esquire

UCSB Arts & Lectures presents Newsweek International editor, columnist and CNN host Fareed Zakaria who will deliver an illuminating lecture titled The Next Security Crisis – Global Threats and U.S. Foreign Policy on Monday, April 12 at 8 p.m. at the Arlington Theatre. Widely respected for his ability to spot economic and political trends around the world, Zakaria is the author of the national bestseller The Post-American World about “the rise of the rest” – China, India, Brazil – and what it means for the future. One of Jon Stewart’s favorite guests on The Daily Show, Zakaria has also appeared on Charlie Rose, PBS NewsHour and BBC World News. His numerous honors include the Overseas Press Club Award and the Deadline Club Award for Best Columnist. The Boston Sunday Globe says, “Zakaria…may have more intellectual range and insights than any other public thinker in the West.”

Zakaria was named editor of Newsweek International in October 2000, overseeing all of Newsweek’s editions abroad. He writes a regular column for Newsweek, which also appears in Newsweek International, and often for The Washington Post. He has served as an analyst for ABC News, a roundtable member on This Week with George Stephanopoulos, and host of Foreign Exchange on PBS. In spring 2008 he launched a new weekly foreign affairs program for CNN Worldwide called Fareed Zakaria GPS. On the program Zakaria conducts in-depth interviews with world leaders, such as Henry Kissinger, Tony Blair, Condoleeza Rice and Barack Obama.

Zakaria came to Newsweek from Foreign Affairs, the widely-respected journal of international politics and economics, where he was managing editor. Prior to joining Foreign Affairs, Zakaria ran a major research project on American foreign policy at Harvard University, where he taught international relations and political philosophy. He has written for such publications as The New York Times, The Wall Street Journal, The New Yorker, The New Republic, and the webzine Slate. He is the author of From Wealth to Power: The Unusual Origins of America’s World Role, and co-editor of The American Encounter: The United States and the Making of the Modern World.

Zakaria’s recent book, The Post American World, is about the growth of China, India, Brazil and many other countries as the great story of our time. It was published in May 2008 and became an immediate New York Times bestseller. He also wrote The Future of Freedom (2003), a global analysis of how democracy has changed every aspect of our lives – from economics and technology to politics and social relations. This book also became an international bestseller and has been translated into nearly 20 languages.

Zakaria has won two Overseas Press Club Awards with Newsweek reporting teams and has been nominated for two National Magazine Awards. He won the Deadline Club Award for Best Columnist and numerous honors for his October 2001 Newsweek cover story, “Why They Hate Us,” which the Boston Globe said, “ought to be mandatory reading in every home in America.” In 1999, he was named “one of the 21 most important people of the 21st Century” by Esquire magazine.

Courtesy of Borders, books by Fareed Zakaria will be available for purchase and signing at the lecture.

Fareed Zakaria’s lecture The Next Security Crisis – Global Threats and U.S. Foreign Policy is presented by UCSB Arts & Lectures with the Orfalea Center for Global & International Studies and generously supported by the Paul F. Glenn Revocable Trust. The lecture is sponsored by the Simpson House Inn. Arts & Lectures’ 50th anniversary season is sponsored by the Santa Barbara Independent and Cox Media. Tickets are $25 for the general public and $10 for UCSB students who must show a valid student ID. For tickets or more information, call Arts & Lectures at 805.893.3535, purchase online at http://www.artsandlectures.ucsb.edu/; or call the Arlington Theatre at 805.963.4408.