Written by Meghan Henry on 07 March 2010 Posted in Theatre News. 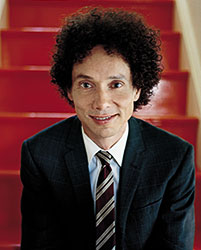 “In the vast world of nonfiction writing, [Malcolm Gladwell] is as close to a singular talent as exists today...[Outliers] is a pleasure to read and leaves you mulling over its inventive theories for days afterward...” – The New York Times


UCSB Arts & Lectures presents National Magazine Award-winning author Malcolm Gladwell, who will deliver the public lecture based on his recently-released book, Outliers – The Story of Success, on Wednesday, March 10 at 8 p.m. at the Arlington Theatre. The bestselling author of What the Dog Saw, The Tipping Point and Blink, Gladwell reveals the real – and mostly overlooked – secrets to extraordinary success, suggesting that we pay far too much attention to what successful people are like and too little attention to where successful people are from: their culture, family and generation. A New Yorker staff writer and one of Time magazine’s 100 Most Influential People, Gladwell interprets groundbreaking research to eloquently transform our understanding of business and culture through well-known models like Bill Gates, Mozart, and The Beatles.

In this presentation, as in his bestselling book, Gladwell zeros in on people who have achieved over and above what’s normally expected. As he recounts their extraordinary lives and achievements, he asks over and over again: Where are they from? What are the kinds of circumstances and backgrounds that have produced these people?

Gladwell concludes that we have over-emphasized the importance of individual gifts in successful people, and underappreciated the role of hidden advan­tages, like family, environment, extraordinary opportunities, and just plain luck. He talks about the structure of opportunity and achievement and the role of hard work and cultural legacies in defin­ing expectations about performance and success. Though Outliers is not a how-to-succeed manual, it does offer provocative suggestions about how society can help nurture success for everyone.

Malcolm Gladwell has been a staff writer with The New Yorker magazine since 1996. His 1999 profile of Ron Popeil won a National Magazine Award, and in 2005 he was named one of Time magazine’s 100 Most Influential People. From 1987 to 1996, he was a reporter with The Washington Post, where he covered business and science, and then served as the newspaper’s New York City bureau chief.

Gladwell is the author of four books, including The Tipping Point: How Little Things Make a Big Difference (2000), Blink: The Power of Thinking Without Thinking (2005), and Outliers: The Story of Success (2008), all of which are number one New York Times bestsellers. His newest release, What the Dog Saw (2009), includes 19 brilliantly researched and provocative essays that delve into subjects as varied as why some people choke while others panic; how changes meant to make a situation safer – like childproof lids on medicine – don’t help because people often compensate with more reckless behavior; and the idea that genius is inextricably tied up with precocity.

Courtesy of Borders, books by Malcolm Gladwell will be available for purchase and signing at the event.

Malcolm Gladwell is presented by UCSB Arts & Lectures and Westmont College and generously supported by the Beth Chamberlin Endowment for Cultural Understanding and the Harold & Hester Schoen Arts & Lectures Endowment. The event is sponsored by The Simpson House Inn. Arts & Lectures’ 50th anniversary season is sponsored by the Santa Barbara Independent and Cox Media. Tickets are $30 for the general public and $15 for UCSB and Westmont College students who must show a valid student ID. For tickets or more information, call UCSB Arts & Lectures at 805.893.3535, the Arlington Theatre at 805. 963.4408, or purchase online at http://www.artsandlectures.ucsb.edu/.