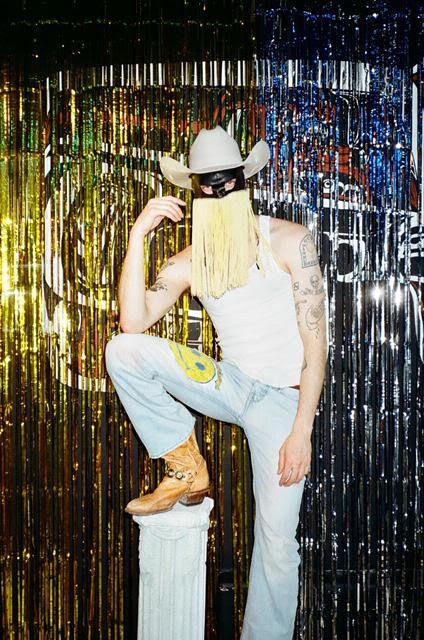 Written by Goldenvoice on 28 January 2020 Posted in Theatre News.

Today acclaimed singer, songwriter and musician Orville Peck announced he will perform at Santa Barbara’s intimate Arlington Theatre on April 22 at 8:00 PM. Paul Cauthen will support the show. The Goldenvoice presale begins Thursday, Jan 30 at 10:00 AM until 10:00 PM with the password, FRITO. The general on sale begins Friday, January 31 at 10:00 AM via AXS.com. For more information, please visit https://www.orvillepeck.com/tour.
Orville Peck makes his late-night television debut tomorrow night on “Jimmy Kimmel Live!” The performance comes as part of Apple Music’s “Up Next” program, which recently selected Peck as their featured artist for January.
This honor continues a breakout year for Peck following the release of his debut album, Pony, out now on SubPop Records. In celebration of the album, Peck will continue his extensive U.S. tour this spring with newly confirmed stops including Seattle’s Showbox, San Francisco’s The Independent, Las Vegas’ Brooklyn Bowl, San Diego’s Humphrey’s and New Orleans’ Music Box Theatre. Peck will also perform at both Coachella and Stagecoach festivals this spring, one of the select few artists performing at both events.
Adding to his landmark year, Peck was recently the first country artist to be on the cover of GQ Style, plus he was featured on the cover of the inaugural issue of the Harper’s Bazaar Men’s issue alongside Travis Scott and J. Balvin, curated by Dior Homme, and Peck also performed at the Dior Homme Men’s Fall 2020 launch last month at Art Basel.
Pony continues to receive extensive critical acclaim:
“Orville Peck’s Pony might be the most engaging and eerie album to come along in quite some time. With a haunting croon that adds to the mystique, Peck mixes a classic country sensibility with nostalgic ballads and a contemporary gothic vibe.” –NPR Music
“It’s a country record, built out of broken-glass heartbreak, tearful melodies, and sweeping, deserted drama, wandering from one blackened torch song to the next.” – FADER
“The priapic ‘Dead of Night’ is Roy Orbison’s ‘I Drove All Night’ if it had a Grindr profile or The Ballad of Buster Scruggs with John Waters behind the lens. We love it so much we might cry.” – The Guardian
“This collection of shoegaze-tinged melodies paired with classic American-country vocals captures Peck’s admiration of country greats like Dolly Parton and Johnny Cash, with a hint of ‘80s glam and grunge.” – PAPER
“As part of a long history of rockers going genre, most famously with glammy New York Dolls frontman David Johansen’s totally 80s transformation to lounge lizard Buster Poindexter, Peck gladly immerses willing listeners in his weird, Southern-fried world.” – Vice
“Pony makes for a compelling introduction to this self-anointed country star.” – Billboard
“Pony is a weirdly satisfying musical milkshake, an at-times spooky blend of classic country, shoegaze ambiance and vintage rock ‘n’ roll that goes down more like a smooth slurp of whiskey.” [“30 Best Country Albums of the 2010s”] – Paste
“You can hear Peck’s fascination with the past all over Pony…in addition to [Johnny] Cash, the carefully arranged music—built around his dramatic vocals that can sweep from a burly growl to a ghostly croon—echoes the doomed romance of Roy Orbison and Chris Isaak.” – Los Angeles Times
Since the release of Pony, the enigmatic country star has garnered widespread attention across the world as well as extensive critical acclaim from NPR’s “Morning Edition,” NPR Music, The New Yorker, Rolling Stone, Vogue, The Guardian, The Fader, the Los Angeles Times and many more. View additional press highlights HERE. Continuing his landmark year, Peck recently collaborated with jewelry designer Pamela Love for a special limited edition “Orville Peck” ring.
Don’t miss your chance to see Orville Peck with special guest Paul Cauthen at Arlington Theatre on April 22. Ticket prices start at $29.50, plus applicable service charges.