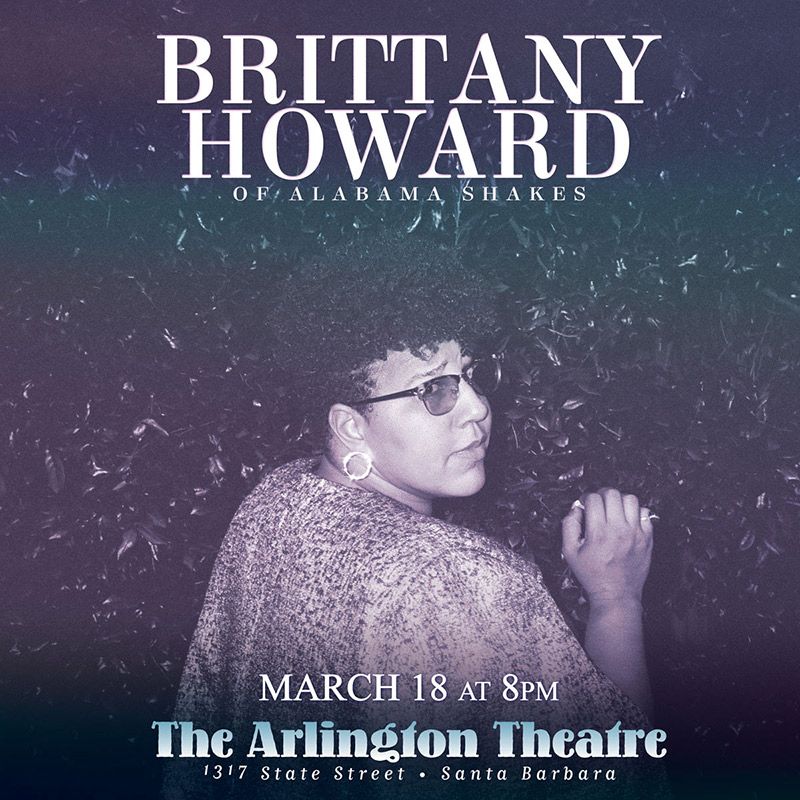 Written by Goldenvoice on 04 December 2019 Posted in Theatre News.

Brittany Howard will kick off a North American headline tour with a trio of California shows in March 2020 which includes a date at The Arlington Theatre on March 18 at 8:00 PM. Becca Mancari will support the show. Tickets are on sale now via AXS.com. More information available at www.brittanyhoward.com.

She will be touring in support of Jaime, her debut solo album, which is already turning up on numerous critics’ “Best of 2019” lists, including that of The New York Times’ Jon Pareles. The track “History Repeats” has been nominated in two GRAMMY categories: Best Rock Performance and Best Rock Song, bringing her total career nominations to 11. She has won four GRAMMY Awards in her role as lead vocalist/guitarist for the chart-topping band Alabama Shakes.

Howard – who has performed everywhere from the Obama White House to the main stage at Lollapalooza, where she sang with Paul McCartney at his invitation – also won praise on her 2019 tour. The Tennessean declared, “Brittany Howard redefines herself at Ryman Auditorium concert.” Magnet Magazine observed, “From the joyful ‘Georgia’ and a funktastic take on Prince’s ‘The Breakdown’ to a soulful version of Jackie Wilson’s ‘Higher and Higher’ and the scarred-but-strong ‘Goat Head’ to the righteous ‘13th Century Metal’ and the self-affirming ‘Run To Me,’ Howard turned a lifetime’s worth of anguish, ecstasy and doubt into catharsis, healing and beauty.” The Austin Chronicle said, “There’s something healing and warm in the best possible way about the music the 30-year-old sensation now makes.”

Howard recently performed “Stay High” on “TODAY Show” in the 8:00 AM hour and “History Repeats” during “3rd Hour TODAY.” She also performed “Short and Sweet” on “The Daily Show with Trevor Noah” and spoke with Noah in an extended interview.

Tickets On Sale Now via AXS.com