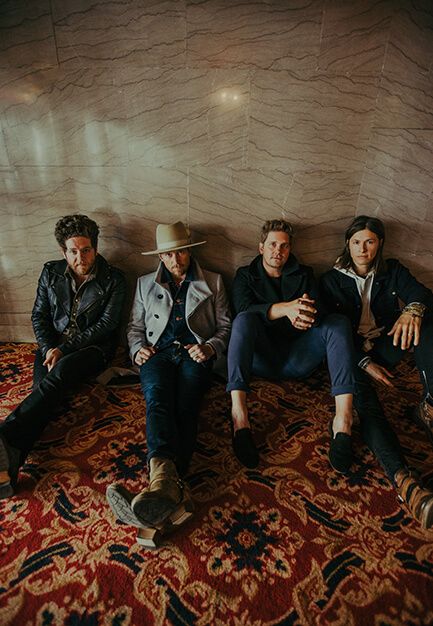 Written by Administrator on 14 November 2018 Posted in Theatre News.

On the heels of the biggest and best-selling tour of their career, southern rock band NEEDTOBREATHE will take their music to the fans once again come February, this time in support of their first-ever acoustic live album, Acoustic Live Vol. 1, playing their most intimate theater shows to date.  The tour will make a stop at Arlington Theatre in Santa Barbara on April 5 with special guest Sean McConnell.

“On our first acoustic tour, we only got to play about 12 or 13 shows in less than 10 cities. We had an absolute blast while on the road for that run and for the recording of Acoustic Live Vol. 1. We decided that when we do it again, we wanted to take the acoustic show to as many places across the country as possible. So although this isn’t our first acoustic tour, we will be playing our acoustic show in most of these cities for the first time ever… and we could not be more excited to show those fans this side of our band,” said Bear Rinehart of NEEDTOBREATHE.

Described as “a multi-crossover band” by the Atlanta Journal-Constitution and “incredible instrumentalists” by the Dallas Observer, Metro Weekly raves that the “four-piece rock band, fronted by the Rinehart brothers, puts on an impressive and stirring live show, courtesy of strong group cohesion, uplifting music, and especially Bear Rinehart’s powerhouse pipes.”

Those “powerhouse pipes” from Rinehart will function as a key ingredient to the band’s newest endeavor—their first-ever acoustic live album, Acoustic Live Vol. 1, due out this Friday, November 16 via Atlantic Records.

The 12-song collection was entirely self-recorded last year across the band’s first-ever fully acoustic tour and features commentary between tracks that transports listeners directly into the audience. One of the numerous standout moments featured on the record include the band’s retelling of their first meeting with friends Drew & Ellie Holcomb, followed by a surprise appearance by the duo at NEEDTOBREATHE’s sold-out performance at the historic Ryman Auditorium in Nashville.

Acoustic Live Vol. 1 was produced solely by NEEDTOBREATHE and mixed/mastered by the band’s own Seth Bolt (backing vocals, bass) at his Plantations Studios in Charleston, S.C. Plantation Studios has functioned as the home studio to the band for all of their previously recorded studio albums with the exception of their most recent offering, Forever On Your Side (Niles City Sound Sessions), which was recorded at Niles City Sound in Fort Worth, Texas.

With four tracks already available in advance of its release, Acoustic Live Vol. 1 represents over a decade of music from five of the band’s six studio albums and is a true compilation of some of NEEDTOBREATHE’s greatest hits prior to entering the studio to record their seventh studio effort.

Exclusive presale for “The Insiders” starts Tuesday, November 13 at 10:00 AM ET with password and ticket information at http://ntbinsiders.com. Artist, Spotify, Ticketmaster, CITI and local presales begin on Wednesday, November 14 at 10:00 AM local time at acousticlive.needtobreathe.com.

April 5 at 7:00PM
The Arlington Theatre

One dollar from every ticket sold to see NEEDTOBREATHE in concert goes to the band’s partnership with OneWorld Health to support the organization in their mission of providing sustainable healthcare to regions in East Africa and Central America. To date, NEEDTOBREATHE has raised over $2 million through ticket sales, fan donations and the band’s annual golf tournament and helped to open two NEEDTOBREATHE Medical Centers in Tola and Jinotega, Nicaragua. Fans interested in learning more about NEEDTOBREATHE’s partnership with OneWorld Health can visit needtobreathecares.org.