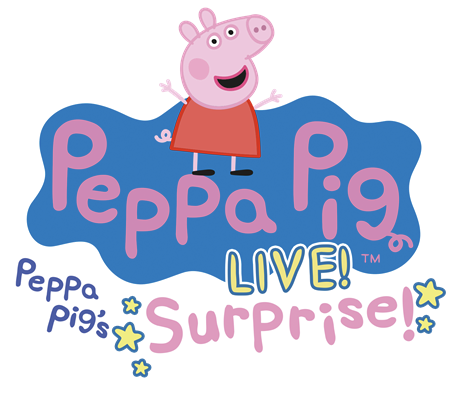 Written by Administrator on 30 July 2018 Posted in Theatre News.

Peppa Pig Live, now one of the most successful family theater tours in North American history with more than 500,000 tickets sold to date, will continue its record-breaking run when it plays the Arlington Theatre in Santa Barbara on Saturday, December 15. Just in time for the holiday season, “Peppa Pig’s Surprise” (www.peppapigliveus.com), the newest live stage show based on Entertainment One’s (eOne) top-rated series airing daily on Nickelodeon and Nick Jr., will visit cities across the United States, including San Jose, Dallas, Houston and Chicago.

Tickets available online at AXS.com, nederlanderconcerts.com or at the Arlington Theatre ticket office. To charge by phone, call (800) 745-3000 or (805) 963-4408. Most tickets and VIP packages, which include meet-and-greets with the characters, go on sale to the general public Friday, August 3, at 10am (local time). Facebook presale begins Tuesday, July 31 at 9am (local time).

In “Peppa Pig’s Surprise,” it’s a lovely day and Peppa is playing outside with her friends. Mummy Pig and Daddy Pig have a surprise for her and her younger brother George, but no matter how hard they try, Peppa and George cannot guess what it is. Audiences will enjoy fun interactive games and, of course, many surprises! The live show encompasses the charming, colorful nature of the incredibly popular preschool series and features brand-new songs and life-size puppets that walk, talk, dance, and jump up and down to give audiences a unique, fully immersive theatrical experience from the moment the curtain opens. The show gives little ones and their families the opportunity to engage with their favorite characters like never before in an unforgettable first live theater experience. For more information and tour dates, please visit www.peppapigliveus.com, Facebook and Twitter.

December 15 at 4:00PM
The Arlington Theatre

Entertainment One Ltd. (LSE:ETO) is a global independent studio that specialises in the development, acquisition, production, financing, distribution and sales of entertainment content. The Company’s diversified expertise spans across film, television and music production and sales; family programming, merchandising and licensing; digital content; and live entertainment. Through its global reach and expansive scale, powered by deep local market knowledge, the Company delivers the best content to the world.

The Company's rights library, valued at US$1.7 billion (as at 31 March 2017), is exploited across all media formats and includes more than 80,000 hours of film and television content and approximately 40,000 music tracks.