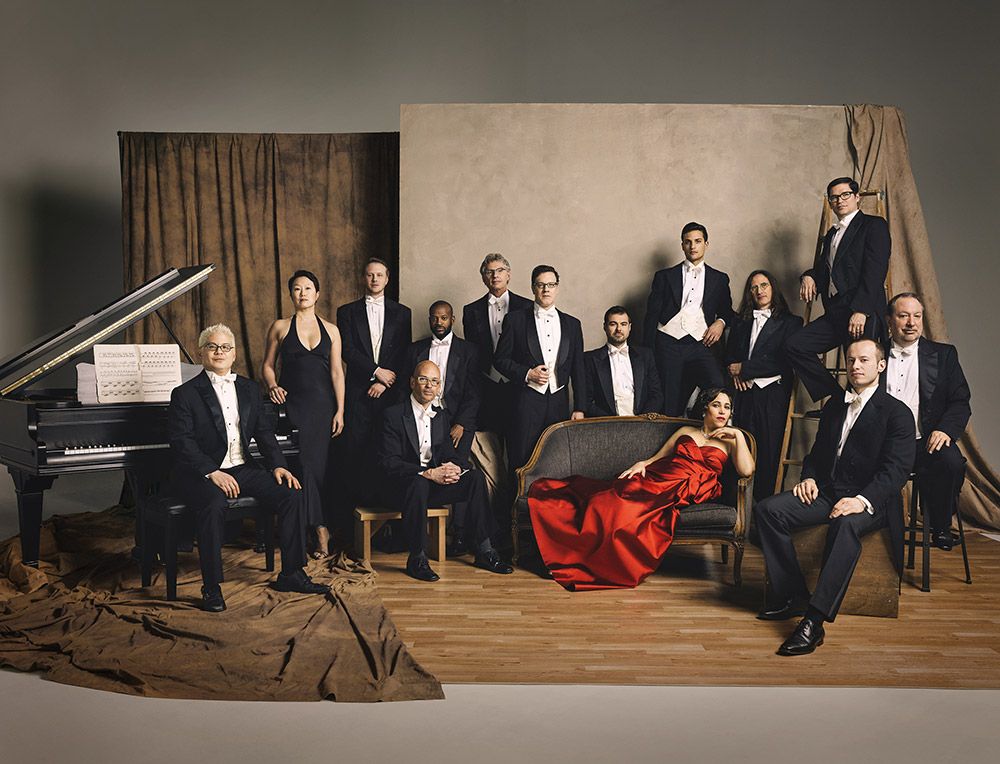 “Their ageless music has only gotten bolder and farther-reaching on the nine albums Pink Martini has made, while never shedding the sense of joy around which its sound revolves.”
NPR

Celebrate the most wonderful time of the year with Pink Martini, the globetrotting “little orchestra” that draws inspiration from classic Hollywood musicals and crosses genres to make an eclectic, modern sound. Combining Latin music, jazz, cabaret and more, this effervescent group is guaranteed to have the audience dancing in the aisles. Beloved singer China Forbes returns to headline the show, performing music from around the world accompanied by the ensemble’s unsurpassed musicianship and infectious joie de vivre. On the heels of their ninth studio album release, Je dis oui!, Pink Martini once again reveals their formidable talent and wide-ranging influences, “tackled with cosmopolitan sophistication and the playfulness of pop” (NPR).

In 1994, in his hometown of Portland, Ore., Thomas Lauderdale was working in politics, thinking that one day he would run for mayor. Like other eager politicians-in-training, he went to every political fundraiser under the sun… but was dismayed to find the music at these events underwhelming, lackluster, loud and un-neighborly. Drawing inspiration from music from all over the world – crossing genres of classical, jazz and old-fashioned pop – and hoping to appeal to conservatives and liberals alike, he founded Pink Martini in 1994 to provide more beautiful and inclusive musical soundtracks for political fundraisers for causes such as civil rights, affordable housing, the environment, libraries, public broadcasting, education and parks.

One year later, Lauderdale called China Forbes, a Harvard classmate who was living in New York City, and asked her to join Pink Martini. They began to write songs together. Their first song “Sympathique” became an overnight sensation in France, was nominated for Song of the Year at France’s Victoires de la Musique Awards and to this day remains a mantra (“Je ne veux pas travailler” or “I don’t want to work”) for striking French workers.

Says Lauderdale, “We’re very much an American band, but we spend a lot of time abroad and therefore have the incredible diplomatic opportunity to represent a broader, more inclusive America… the America which remains the most heterogeneously populated country in the world… composed of people of every country, every language, every religion.”

Featuring a dozen musicians, Pink Martini performs its multilingual repertoire on concert stages and with symphony orchestras throughout Europe, Asia, Greece, Turkey, the Middle East, Northern Africa, Australia, New Zealand, South America and North America. Pink Martini made its European debut at the Cannes Film Festival in 1997 and its orchestral debut with the Oregon Symphony in 1998 under the direction of Norman Leyden. Since then, the band has gone on to play with more than 50 orchestras around the world, including multiple engagements with the Los Angeles Philharmonic at the Hollywood Bowl, the Boston Pops, the National Symphony at the Kennedy Center, the San Francisco Symphony, the Cleveland Orchestra and the BBC Concert Orchestra at Royal Albert Hall in London. Other appearances include the grand opening of the Los Angeles Philharmonic’s Frank Gehry-designed Walt Disney Concert Hall, with return sold-out engagements for New Year’s Eve 2003, 2004, 2008 and 2011; four sold-out concerts at Carnegie Hall; the opening party of the remodeled Museum of Modern Art in New York City; the Governor’s Ball at the 80th Annual Academy Awards in 2008; the opening of the 2008 Sydney Festival in Australia; multiple sold-out appearances, and a festival opening, at the Montreal Jazz Festival, two sold-out concerts at Paris’ legendary L’Olympia Theatre in 2011; and Paris’ fashion house Lanvin’s 10-year anniversary celebration for designer Alber Elbaz in 2012. In its 20th year, Pink Martini was inducted into both the Hollywood Bowl Hall of Fame and the Oregon Music Hall of Fame.

Pink Martini is presented by UCSB Arts & Lectures. The event sponsor is Patricia Gregory, for the Baker Foundation. The media sponsor is the Santa Barbara Independent. The wine sponsor is Palmina.

Tickets are $40-$60 for the general public and $20 for UCSB students (valid student ID required). A limited quantity of $150 tickets include a post-show holiday party. An Arlington facility fee will be added to each ticket price.