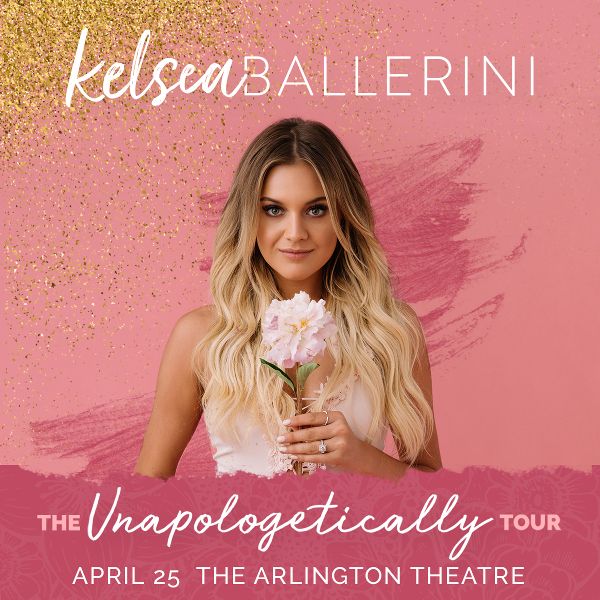 Written by Goldenvoice on 31 October 2017 Posted in Theatre News.

Fueled by a successful sold-out headlining tour last year, THE FIRST TIME TOUR, acclaimed Country star KELSEA BALLERINI is pushing full-throttle with the announcement of THE UNAPOLOGETICALLY TOUR this winter which will include a stop at The Arlington Theatre in Santa Barbara on April 25 at 7:30 PM. Special guest and breakout artist Walker Hayes will support the show. Tickets go on sale Friday, November 3 at 10:00 AM via AXS.com.

The Goldenvoice presale begins Thursday, November 2 at 10:00 AM to 10:00 PM with the password: Unapologetically2.

Lauded by this week’s Entertainment Weekly "3 Rounds With” feature, “Country music is notoriously male-dominated industry, but one woman makes conquering it look easy: Kelsea Ballerini.” The trailblazing Black River Entertainment recording artist’s nationwide trek kicks off February 8 at the Alabama Theatre in Birmingham, AL, and wraps April 27 at the annual Stagecoach Festival in Indio, CA (on-sale now), with stops in Nashville, TN, New York, NY and Seattle, WA. “Great things happen when music surrounds you, I really believe that,” shared Ballerini. “One of the coolest things to me about headlining is being able to create a world for your fans to step into. I can’t wait for you to join me on this new journey with my good friend Walker and begin chapter two together!”

For fans that want to fully step into Ballerini’s tour world, VIP Experiences will be available at each show thanks to CID Entertainment. Packages include a meet & greet with Ballerini, collectible merchandise, an invitation to the ‘Unapologetically’ pre-show experience and early venue entry. VIP packages will be available for purchase beginning Tuesday, October 31 at 10 :00 AM via https://kelseaballerini.com/events.

Before Ballerini takes the stage with icon Reba McEntire at the 51st annual CMA Awards (11/8) for a must-see duet, the Female Vocalist of the Year nominee returned to her alma mater, Knoxville’s Central High School, Saturday (10/28), for a “mountaintop” hometown celebration ahead of the UNAPOLOGETICALLY album release on November 3.

In partnership with the Tennessee Department of Tourist Development for their Snapchat Concert Series and ongoing “The Soundtrack of America. Made in Tennessee.” brand campaign, Ballerini proudly returned to the spot she stood as a student performing an original song for the very first time.

Sporting a bedazzled “Central” school jersey emblazoned with “Ballerini” on the back, the grateful alum embodied everything her “Bobcat Nation” had once taught her – “Dream, Believe, Achieve.” Bringing the moment full circle, she presented the Choral Department with a check for $20K, with the support of the Academy of Country Music, prior to her fitting encore performance of “High School.”

Overwhelmed with pure emotion, Ballerini tearfully shared, “My two years here were two of the most character and career defining years of my entire life and my biggest advice to anyone in middle school or high school is to find what makes you happy and do it.” Adding, “And if that is music, I want to help.” In turn, the school’s principal surprised Ballerini with their highest honor, the Bobcat Award.

The showstopper mixed her smash-hits such as her history-making penned “Peter Pan” – recently recognized as one of the “Ten Songs I Wish I’d Written” for 2017 by the Nashville Songwriters Association International (NSAI) – with new tracks from her much-anticipated sophomore album, including current chart-rising single “Legends” and iTunes Country #1 “Miss Me More.”

Unapologetically in love, Ballerini created an intimate atmosphere for her fans by sweetly introducing her fiancé, Morgan Evans, in addition to dishing on the personal stories behind her new songs. While sitting on the edge of the stage, she also revealed what it meant to return for the free show, which drew a landmark crowd from 26 states and four countries.

Thanks to the Tennessee Department of Tourist Development, all attendees were gifted with UNAPOLOGETICALLY download cards for the new album.

Ballerini will next make her debut on CBS’ The Late Show with Stephen Colbert on November 3, followed by ABC’s Good Morning America live from Nashville on November 8.

Named among the "30 Biggest Albums of Fall” by Entertainment Weekly, GRAMMY nominee Kelsea Ballerini has released her first heart-melting anthemic single “Legends” off her highly anticipated sophomore album, UNAPOLOGETICALLY, slated to drop November 3. The Black River Entertainment artist skyrocketed to stardom after releasing three consecutive PLATINUM-certified, #1 smashes from her critically acclaimed, GOLD debut album THE FIRST TIME – “Love Me Like You Mean It," “Peter Pan,” and “Dibs” – making her the only female artist in Country music history, including female duos and groups, to achieve this accolade. The talented singer-songwriter also reached GOLD with Top 5 hit “Yeah Boy,” after having written or co-written all 12 songs on her debut. Ballerini has appeared on the cover of Billboard Magazine’s GRAMMY preview issue, was included in Forbes’ “30 Under 30” class of 2017, and featured in People Magazine’s “Beauty at Every Age” list in their iconic World’s Most Beautiful issue for 2017. She's been named “The Country Sweetheart” in People’s elite “Ones to Watch” portfolio, praised by Rolling Stone as the “Nashville It Girl,” touted by Billboard as “Country’s Next Queen,” and selected as one of CMT’s Next Women of Country. After her 2016 headline THE FIRST TIME TOUR – which visited dozens of cities across the U.S. and included sold-out shows in her hometown of Knoxville, Tennessee; Minneapolis, Minnesota; New York City; Los Angeles; and more – Ballerini joined Thomas Rhett for his HOME TEAM TOUR followed by Lady Antebellum’s YOU LOOK GOOD WORLD TOUR. Awarded Billboard’s “Rising Star” title at the prestigious 2015 Women in Music event, she has continued to gain recognition by scoring her first-ever ACM Award win for New Female Vocalist of the Year, iHeartRadio Music Award for Best New Country Artist, multiple Radio Disney Music Awards, American Country Countdown Award (ACCA) for Breakthrough Female of the Year, ACM Honors’ Gene Weed Milestone Award and acknowledged as Artist of the Year by Nashville Business Journal. Ballerini is vying for Female Vocalist of the Year at the 51st annual CMA Awards airing live from Nashville on November 8 on ABC. She will also be honored with the ASCAP Vanguard Award at the 55th annual ASCAP Country Music Awards (11/6).

Mobile, Ala. born-and-raised singer/songwriter and Monument recording artist, Walker Hayes, released two collections of eight songs, in conjunction with SMACKSongs, in 2016: 8 Tracks (Vol 1): Good Shit and (Vol. 2): Break The Internet. Hayes’ quirky lyrics and unorthodox arrangements landed him on tour with syndicated morning radio host, Bobby Bones, as well as Dan+Shay’s Obsessed Tour. His first single, “You Broke Up With Me,” impacted Country radio on June 26 and is available on all streaming services and for digital download. The single has already held the No. 1 spot on SiriusXM's the Highway Top 30. Currently, Hayes is on the road for Thomas Rhett’s Home Team Tour and will be releasing his album boom., that Hayes co-produced with GRAMMY Award-winning producer Shane McAnally, on December 8, 2017.

April 25 at 7:30PM
The Arlington Theatre