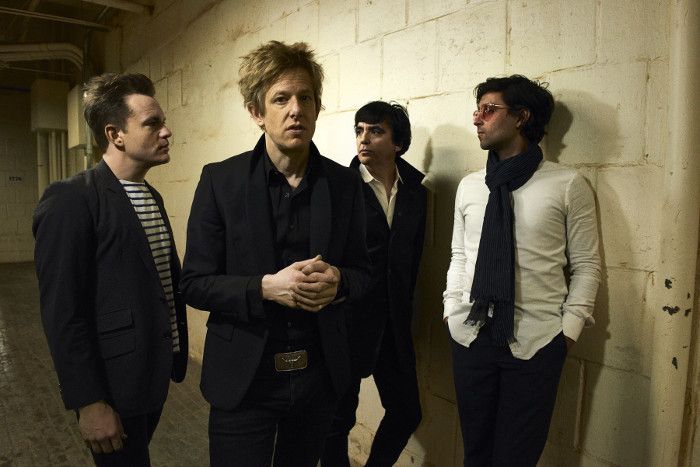 Written by Goldenvoice on 04 October 2017 Posted in Theatre News.

Spoon announces a run of dates that include a stop at The Arlington Theatre in Santa Barbara on January 18, 2018 at 8:00 PM. Tickets go on sale to the general public on Friday, October 6 at 10:00 AM via AXS.com.

The Goldenvoice presale begins Thursday, October 5 at 9:00 AM and concludes Friday, October 6 at 9:00 AM. The password is SPOONTHEBAND.

Spoon have released a new video set to a live recording of album standout track, “I Ain’t The One.” Renowned British artists and filmmakers Iain Forsyth and Jane Pollard (Silent Sound, 20,000 Days On Earth) have captured one of the world’s most formidable live bands in an intimate studio setting, the slinky silhouettes and blue-tinged shadows complimenting the song's sinewy synths and Britt Daniel’s standout soulful vocals. The minimalist drums and bass surface sporadically throughout, building tension across the melancholy melody that never quite relents.

It has been a whirlwind year for Spoon, Austin’s most esteemed rock ambassadors, and they’re showing no signs of slowing down. Spoon’s ninth album Hot Thoughts came out to a cavalcade of critical ecstasy in March, and has sustained continuous praise in all the “Mid-Year Best-Of” lists, a sure sign of what’s to come as we enter the last leg of 2017.

The Hot Thoughts heatwave hit record highs this summer, with Spoon melting faces at festivals, clubs, and amphitheaters across the country including Forecastle, XPN, Panorama, Lollapalooza, Bumbershoot, Hollywood Bowl, Merriweather Post Pavilion, and more. Billboard called their Lolla set “a greatest hits show... there were no sleepers in this rapid fire rock set” and the Chicago Tribune agreed that they “demonstrate how it's possible to evolve and bring in fresh ideas while retaining the terse, melodic impulse of its vintage days." Brooklyn Magazine dubbed them the “perfect festival band” upon catching them at Panorama, and American Songwriter agreed, calling them the “perfect way to end an incredible weekend [at Forecastle Fest] of music.”

Never ones to slow down, Spoon will reissue their 2007 classic Ga Ga Ga Ga Ga on Merge Records on October 20th before heading to Europe in November. They return stateside just in time for two NYC shows, newly added East Coast dates, even more national TV appearances (to add to their previous performances this year on Corden, Kimmel, Ellen, and Colbert), and a blow-out two-night New Years Eve celebration at the 9:30 Club

January 18 at 8:00PM
The Arlington Theatre