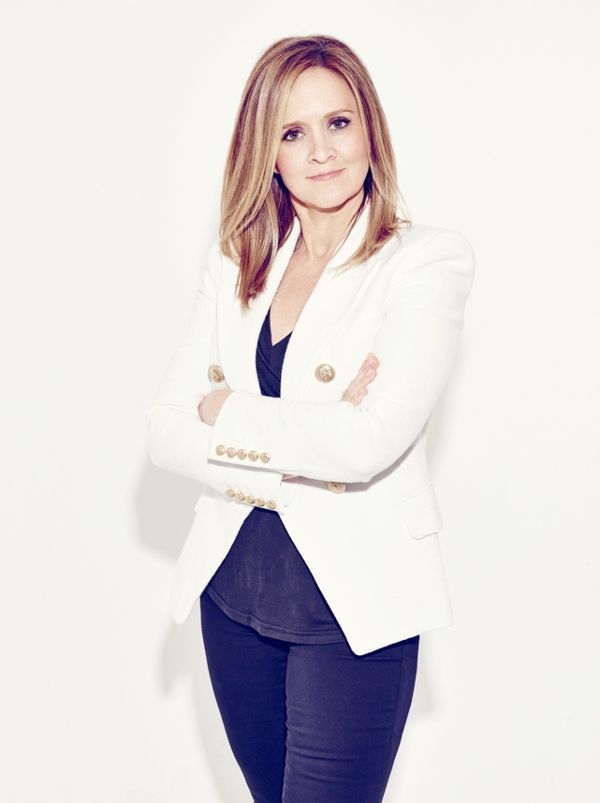 Written by Administrator on 05 September 2017 Posted in Theatre News.

“She’s got [swagger] to spare.”
Wired

UPDATE: The groundbreaking comedian Samantha Bee, Emmy Award-nominated host of Full Frontal and former correspondent on The Daily Show with Jon Stewart, will appear in a whip-smart moderated conversation with award-winning journalist Starshine Roshell (mature content) on Thursday, November 9, at 8 p.m. at the Arlington Theatre

The first woman to host her own late-night satirical news show, Samantha Bee has changed the tone of the genre with her bare-knuckle delivery. The Emmy Award-nominated Full Frontal with Samantha Bee walks a line between outrage and hilarity, and Bee is well-equipped for the job: She is “a news junkie, an unapologetic feminist; she is direct and sincere and also bitingly funny” (New York magazine). Bee cut her teeth as the longest-serving correspondent on The Daily Show with Jon Stewart, where for 12 years she stood out both for her humor and for being one of the program’s few female correspondents. The groundbreaking comedian will make her Santa Barbara debut in a whip-smart moderated conversation full of her “wry, smarty-pants charm” (Vogue). (Mature content.)

Please note: Samantha Bee’s appearance was originally scheduled for Oct. 5. Due to an unforeseen scheduling conflict, the comic rescheduled her appearance for Nov. 9. Her appearances with the Mondavi Center at UC Davis and Stanford Live have also been rescheduled. All tickets purchased for the original Santa Barbara date will be honored and ticket holders will be notified. Patrons who already purchased tickets should retain their original tickets for admission to the rescheduled event.

With her late-night show Full Frontal with Samantha Bee, Samantha Bee quickly established herself as having one of the most unique and sharp comedic voices on television. Born and raised in Toronto, Canada, Bee began her career performing as a member of the all-female sketch comedy troupe The Atomic Fireballs.

In 2016, Bee received global recognition from the success of her very own weekly late night comedy series, Full Frontal with Samantha Bee, which premiered Feb. 8, 2016 on TBS. Full Frontal offers a unique satirical take on weekly news and explores other important stories in-depth that have been largely overlooked by more traditional media outlets. Full Frontal received rave reviews, and the show was picked up by TBS for a full season within weeks of its premiere and renewed for a second season. In a landscape of male late night talk show hosts, critics have appreciated Bee’s “fiery and fierce” delivery (The New York Times) and have embraced Full Frontal as a “daring, innovative addition to the late-night slate” (Entertainment Weekly). Bee earned a 2016 Television Critics Association Award nomination for Individual Achievement in Comedy for her work on Full Frontal, and the show received its own nomination in the category of Outstanding News and Information. She and the show were also nominated for a Primetime Emmy in 2016 in the category of Outstanding Writing of a Variety Series.

Bee and her husband Jason Jones also co-created the 10-episode, half-hour comedy series The Detour, whose second season premiere on TBS on Feb. 21, 2017. The Detour, which stars Jones, is inspired by their personal experiences on family getaways. The show follows Nate (Jones), Robin (Natalie Zea) and their two kids, Delilah and Jared, for what Nate believes will be the adventure of a lifetime on a road trip to Florida, which quickly turns into a disaster. The series was renewed for second season ahead of its April 11, 2016 premiere.

In 2015, Bee appeared opposite Tina Fey and Amy Poehler in the comedy film Sisters, directed by Jason Moore and written by Paula Pell. Last year, Bee appeared in Learning to Drive, alongside Patricia Clarkson and Ben Kingsley. Additionally, she starred opposite Jason Jones in the 2010 film titled Coopers’ Christmas.

In 2010, Simon and Schuster published Bee’s collection of personal essays, I Know I Am, But What Are You? She is currently writing a middle-grade novel for Farrar Straus Giroux.

Starshine Roshell is an award-winning journalist who waxes wise and witty on sex, parenting, politics and culture. Raised in Los Angeles’ entertainment industry, she’s worked as a daily newspaper reporter and feature writer for dozens of magazines and blogs, including The Week, The Hollywood Reporter and the New York Post. Insightful and audacious, playful and literate, Starshine has authored a popular blog on SheKnows.com, taught writing at UCSB and LinkedIn Learning and interviewed George Clooney, Ellen DeGeneres, Steve Martin and Tom Hanks for stories. Recent columns include interviews with Gloria Steinem, Serial host Sarah Koenig, Sandra Tsing-Loh, Orange Is the New Black writer Piper Kerman and #ShoutYourAbortion founder Amelia Bonow. Santa Barbara Independent readers have named her Best Columnist for the past 10 years in a row.

Tickets are $85-$150 for the general public ($50 tickets are sold out) and $25 for UCSB students (valid student ID required). An Arlington facility fee will be added to each ticket price.