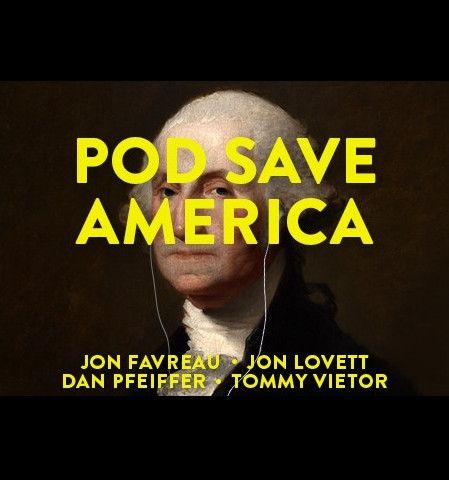 Written by Administrator on 13 August 2017 Posted in Theatre News.

Jon, Jon, Tommy, Dan and special guests are bringing the pod to The Arlington Theatre Friday, December 1, 2017 at 8:00 PM for a live, no-bullshit conversation about politics, the press, and the challenges posed by the Trump presidency.

JON FAVREAU
Jon Favreau served as Barack Obama's head speechwriter from 2005-2013, a role that was far more senior and influential than Jon Lovett's. Since leaving the White House, Favreau has spoken about politics and speechwriting to audiences throughout the world, written for publications like The Daily Beast and The Ringer, and started a political podcast with three of his Obama friends in the ideologically diverse bellwether of Los Angeles, California. Jon grew up outside of Boston and graduated from the College of the Holy Cross.

JON LOVETT
Jon Lovett is a straight shooter widely respected on all sides. He earned this reputation (which is seriously fantastic, ask people) as a speechwriter for Hillary Clinton and as a presidential speechwriter in the Obama White House. Jon has written truly excellent speeches, really great, on a range of policy issues. He helped write the president's annual remarks to the White House Correspondents Dinner. Many people say Jon is one of the funniest guys to do this. The jokes are just terrific. In the years since he's become a really big league writer in Hollywood. He had a hit sitcom on NBC called "1600 Penn" which was cancelled by some crooked, disgusting people. Totally rigged deal. Also Jon has a great brain. He went to Williams, OK? One of the top guys.

DAN PFEIFFER
Despite several members of the Morning Joe panel calling for his firing, Dan Pfeiffer served President Obama for eight years as his Communications Director on both the 2008 Campaign and in the White House and finally as Senior Advisor to the President. In addition to podcasting, he now works in Silicon Valley and he is a CNN Contributor. Dan was born in Delaware and has been banned from traveling to Russia by Donald Trump's friend Vladimir Putin.

TOMMY VIETOR
Before seeking fame and fortune through podcasting, Tommy Vietor spent nearly a decade working as a spokesman for President Barack Obama. Vietor served as the President Obama's National Security Spokesman, where he was the media's primary contact on all foreign policy and national security issues, and as Assistant White House Press Secretary, where he handled foreign policy, education and labor issues. In case you're still reading, he was also Obama's flak in Iowa during the caucuses and worked in his Senate office. Now he spends his days tweeting and getting interrupted by Jon Lovett. He grew up in Boston and graduated from Kenyon College.