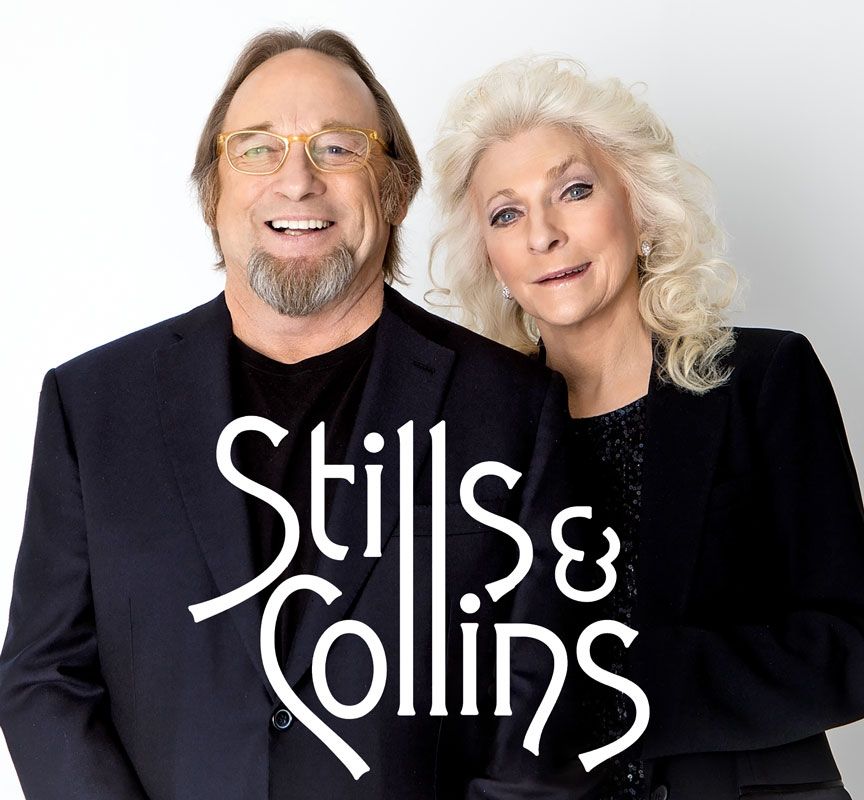 Written by Goldenvoice on 11 July 2017 Posted in Theatre News.

Stephen Stills & Judy Collins to Perform at The Arlington Theatre

Stephen Stills & Judy Collins will perform at The Arlington Theatre in Santa Barbara this fall on Saturday, October 28 at 8:00 PM. Tickets go on sale Friday, July 14 at 10:00 AM via Ticketmaster.com.

Judy Collins and Stephen Stills first met in 1967 and quickly fell into a tumultuous love affair that would be immortalized in Stephen's song "Suite: Judy Blue Eyes." Out September 22 on Wildflower / Cleopatra Records, 'Stills & Collins' marks the first album the two icons and longtime friends have recorded together. The loving, playful and emotional album finds Judy and Stephen performing refreshed versions of songs that tie their whimsical 50-year history together, plus a brand new song penned by Judy for this album, and a refined take by both artists on classics by Bob Dylan, Leonard Cohen, Traveling Wilburys and more. Judy and Stephen have announced their first-ever tour together as well, which begins July 26 and goes through Fall 2017.

'Stills & Collins' is bursting with songs that illustrate a rich history between the two legends. "Who Knows Where The Time Goes," from Judy's 1968 album of the same name, was the first song Judy and Stephen ever recorded together. Stills first recorded "Judy" in a demo session immediately following Judy's 'Who Knows Where The Time Goes' session, in the very same studio. This demo tape was lost for years and later issued as the 'Just Roll Tape' album. "So Begins The Task" is another Stills original that also appears on the 'Just Roll Tape' demo. The song was later recorded for Stills' Manassas debut, and for 'CSN 2012.' Judy recorded "So Begins The Task" as well, for 1973's 'True Stories and Other Dreams.' She wrote "Houses" about her relationship with Stephen, a standout track from her landmark release, 1975's Platinum-selling 'Judith.'

The album also features duets over classic songs such as Bob Dylan's "Girl From The North Country." Judy, known for her early interpretations of Leonard Cohen's work, selected "Everybody Knows" for this album - her first time recording it. Stephen and Judy sing over a soaring version of Traveling Wilburys' "Handle With Care." The song "Questions" was written by Stills and recorded for Buffalo Springfield's 'Last Time Around,' and later revisited on the second section of "Carry On," from Crosby, Stills, Nash and Young's 'Déjà Vu.'

And finally - Judy penned a brand new song for this album, "River Of Gold." 'Stills & Collins' was recorded at West Lake Studios in West Hollywood, and was produced by Stephen Stills, Judy Collins, Marvin Etzioni and Alan Silverman. It features Russell Walden on piano, Kevin McCormick on bass, and Tony Beard on drums.

'Stills & Collins' will be released on the heels of a very busy period for Collins, who released an album in 2015 and 2016. 2015's 'Strangers Again' earned Judy her highest Billboard 200 debut in almost 30 years, and 2016's 'Silver Skies Blue' duets album with Ari Hest earned a GRAMMY nomination for Best Folk Album. She's recently been described by the NY Times as the "ageless wild angel of pop," appeared in HBO's Girls, and released the book 'Cravings: How I Conquered Food' earlier this year.

Stills is known for his work with Buffalo Springfield, Crosby, Stills & Nash, and his solo work. In addition to "Suite: Judy Blue Eyes," Still is best known for the hits " For What It's Worth" by Buffalo Springfield and "Love The One You're With" from his solo debut, Stephen Stills. He's a multi-instrumentalist, composer, and ranked #28 in Rolling Stone Magazine's "The 100 Greatest Guitarists Of All Time." He also has the added distinction of being the first artist to be inducted into the Rock N' Roll Hall of Fame twice in one night (for his work with CSN and Buffalo Springfield).