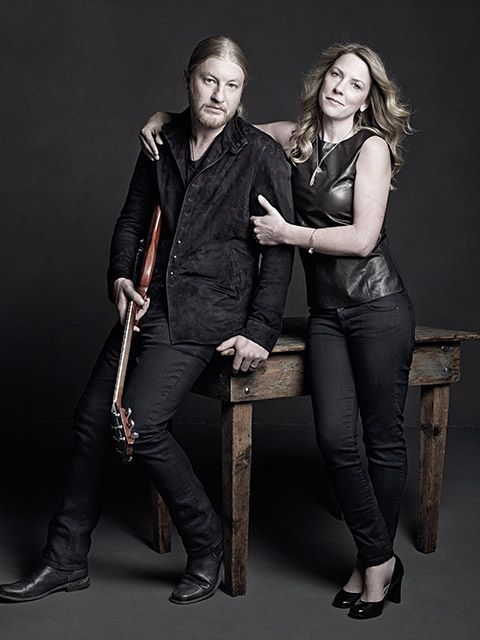 Written by UCSB A&L on 30 September 2014 Posted in Theatre News.

"The 11-piece band booms like a soul thunderclap." Boston Herald

"Equal parts Stax and Muscle Shoals without dilution of either." Rolling Stone

The 11-piece tour-de-force band led by husband-wife team Derek Trucks and Susan Tedeschi has proven itself as one of the hottest, most uplifting acts on the road today. Formed in 2010 when Derek, one of the most respected guitarists of his generation, and six-time Grammy nominee Susan decided to set aside their successful solo careers, Tedeschi Trucks Band has since been touring the globe, accruing fans and accolades along the way – including a Best Blues Album Grammy for Revelator, its debut release.

Fronted by Trucks' signature slide guitar and Tedeschi's honey-to-husk voice, TTB – as their fans call them – delivers a hearty, roots-rich musical mix with the power to renew faith in live music.

Writes The Post-Standard (Syracuse) of a recent show: "Trucks played the lightning to Tedeschi's thunder, accenting her soulful voice and bluesy guitar with his furious six-string. It's a partnership unparalleled in rock 'n' roll, and one that makes the Tedeschi Trucks Band a group that will go down in history as one of the great rock groups of this generation."

Don't miss this blazing hot concert by one of the best live music acts around!

Tedeschi Trucks Band's concert is presented by UCSB Arts & Lectures. Tickets to Tedeschi Trucks Band's show are $50 to $75 for the general public and $20 for UCSB students with a current student ID. (An Arlington facility fee will be added to each ticket price.) For tickets or more information, call UCSB Arts & Lectures at (805) 893-3535 or purchase online here. Tickets are also available through the Arlington box office at (805) 963-4408 and Ticketmaster.

About Tedeschi Trucks Band
Tedeschi Trucks Band is an 11-member collective that thrills audiences worldwide with its transcendent live performances and award-winning albums. Formed in 2010 by husband and wife Susan Tedeschi and Derek Trucks, and featuring two harmony singers, a three-piece horn section, keyboards, bass and a pair of drummers, TTB disproves the adage "less is more" while building a devoted following of fans and critics alike.

Tedeschi Trucks Band has toured extensively throughout the U.S., Canada, Australia, Europe and Japan, headlining the venerable Newport Jazz Festival, co-headlining tours with B.B. King and The Black Crowes, and playing to packed houses in the world's most celebrated venues, from Red Rocks Amphitheatre and the Beacon Theatre to the Hollywood Bowl and Royal Albert Hall. TTB's debut release Revelator, produced at the couple's Swamp Raga home studio, earned both Grammy and Blues Music awards, while 2011's dynamic live follow-up, Everybody's Talkin', delivered a double-disc classic reminiscent of legendary concert recordings like Joe Cocker's Mad Dogs & Englishmen and The Allman Brothers Band's At Fillmore East. Its second studio effort, Made Up Mind (August 2013), entered the Billboard 200 at No. 11.

Emerging as one of the most respected guitarists of his generation, Trucks led his own Derek Trucks Band for over 15 years prior to teaming with Tedeschi. Presently and for the past 13 years, the Florida native also performs as a full member of The Allman Brothers Band and has toured with both Eric Clapton and Carlos Santana. Additionally, as the youngest musician to make the list, the slide guitar wunderkind was voted No. 16 of the top 100 Guitarists of All Time (Rolling Stone, 2011) by a panel of fellow musicians and industry experts.

No stranger to center stage herself, singer-guitarist Susan Tedeschi started playing in bands in her hometown of Boston at age 13. Her knack for combining American roots music – particularly electric blues, Southern soul and gospel – with passionate, awe-inspiring vocal prowess has resulted in a prolific solo career full of award-winning records, six Grammy nominations and a devoted following. Blessed with a voice that ranges from powerful R&B belters to gentle ballads, Tedeschi is a talented guitarist as well, her style alternately recalling post-war electric blues and Hendrix-inspired rock.

Easily capable of shining as individuals, this ensemble of 11 is concerned more with the sound than the spotlight. Sharing a level of respect and camaraderie rarely found in rock and roll, Tedeschi Trucks Band has found a magical combination that delivers nightly an unforgettable, can't-miss concert experience. For these musicians and their audiences, more is indeed more.