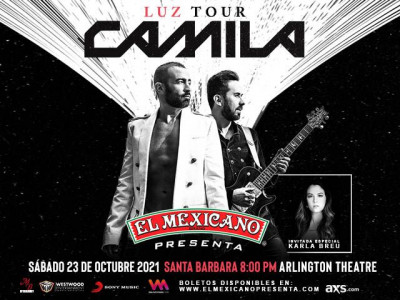 CAMILA, the group that has set a trend in the Spanish speaking world for more than fifteen years of an impressive career, is now ready to begin their tour “ LUZ TOUR” across the United States. After the successful “4 LatiDos” tour (2018-2020) in which they shared the stage with Sin Bandera. They accomplished more that 50 Shows across the American Continent, half of them in the United States. In the beginning of 2020, Camila kicked off their “HACIA ADENTRO” tour, visiting various cities in the United Stats. A few months after they celebrated their 15th anniversary releasing singles such as “Luz” and “Bandera Blanca”. CAMILA is now back with their “LUZ TOUR”, which will start in the month of August

Camila has reached diverse places with their music. Their impact does not stop: wether it be in the radio with 15 #1 hit singles, in front millions of spectators with their grand tours across Latin America, Asia, and the USA (+500 shows in 21 countries) or with their more than 2 million album sales and +5,500 million audio and video streams on various digital platforms. Today Camila is considered the group with the most impact in the history of Spanish ballads and one of the Latin artists that have toured across the United States, alone and accompanied by great artists such as Marco Antonio Solis and Sin Bandera.

: Founded by the laureate composer, interpreter and producer Mario Domm (Torreón, Coahuila), Camila emerged officially in the year 2005 when he signed the first record deal with Sony Music, alongside his colleagues and friends the guitarist Pablo Hurtado (San Luis Potosí) and the singer Samo (Veracruz). Albums recorded with them were “Todo Cambio” (2006) and “Dejarte de Amar” (2010), both immensely successful hits that turned the group into one of the indispensable references in the music for Latin America. Since then Camila has reached 15 times the top of the Mexican hit lists amongst others crossing their borders. Singles such as “Abrázame”, “Coleccionista de canciones”, “Todo cambió”, “Mientes”, “Aléjate de mí”, “Bésame”, “Decidiste Dejarme”, “Perdón” y “Te Confieso” and many other, have granted them extraordinary numbers in the music industry of our days.

To this are added the uncountable experiences on stages such as Madison Square Garden in New York, the Nokia Theater in Los Angeles, the Colosseum of Puerto Rico, the Barquisimeto of Venezuela ( in which 100,000 people attended) the Gran Rex in Argentina and Viña del Mar in Chile, to mention a few outside of Mexico, country in which they have performed in the greatest stages, including eight times in the Auditorio Nacional, four times in the Palacio de los Deportes and the Foro Sol. A hard to beat record. In addition Camila has collaborated with international stars such as Ricky Martin, Marco Antonio Solis, Colbie Caillat, Kenny G, Alejandro Sanz, Alejandra Guzmán, Reyli, Chambao, Aleks Syntek, Wanessa Camargo, amongst others, In 2014 Camila released their third studio album, “Elypse”,changing their status from trio to duo. Today Mario Domm and Pablo Hurtado who beat this music project with which people have delivered with such fervor, and follow with great loyalty. Camila, with their “ ELYPSE” tour, became one of the Latin artists that have toured the United States with more than 70 shows. In 2019 Camila released their fourth studio album “ Hacia Adentro” and accomplish with great success “ 4 LatiDos Tour” along side Sin Bandera (more than 120 shows) .

Tickets for CAMILA at the Arlington are available at the box office and on AXS.com