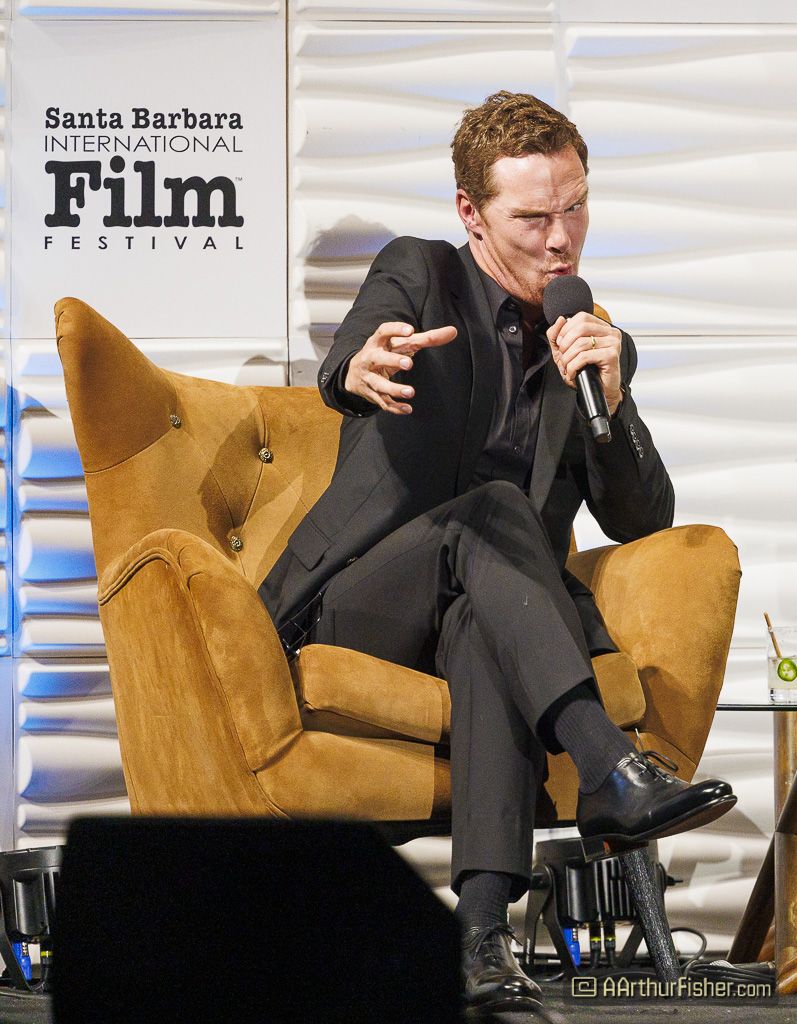 Written by Ashley Balzer on 12 March 2022 Posted in SBIFF Reviews.

The streets of downtown Santa Barbara were alive and buzzing with excitement as fans crowded the entrance of the Arlington Theater, eager for the arrival of Benedict Cumberbatch. Screams erupted as Cumberbatch and his wife, Sophie, exited their car and charmed and smiled their way down the red carpet. Dressed in all black and gleaming, Cumberbatch shook the hands of the interviewers, and stopped and smiled for pictures with Jane Campion, who embraced him and laughed as they exchanged words before entering the theater, which exploded in thunderous applause. A legend was here in Santa Barbara.

Festival director Roger Durling beamed at the crowd as he proudly stated that this was the first sold-out night this year’s festival had seen. Clearly, Cumberbatch’s presence meant something to the community. Almost 20 years ago, to the date, Cumberbatch began his whirlwind career, and he hasn’t slowed down since. Dubbed “The Cumberbitches,” his fanbase is as loyal as they come, following him from his humble beginning in BBC’s adaptation of Sherlock Holmes, all the way to his notorious role as Marvel’s Dr. Strange. The audience roared as they looked back on a montage of his vast career, set fittingly to Elton John’s Rocket Man, with cheers breaking out every time a beloved role of his appeared on-screen. Cumberbatch was all smiles as he hopped onto the stage and joined Peter Hammond, Deadline Awards Columnist and chief critic, to reflect on his time in Hollywood and most famous roles.

The child of two actors, Cumberbatch got his start at an early age. He has an impressive rap sheet, to say the very least, and he got his humble beginning in the theater, with his first major role being that of Titania, queen of the fairies, in an all-boys production of A Midsummer Night's Dream. He chuckled as he reminisced of the confusion he experienced as a pre-pubescent boy playing a role that was meant for a girl. Cumberbatch charmed the audience with his thoughtful insights on the roles he’d played, mentioning how intimidated he felt when taking on roles such as Stephen Hawking and Sherlock Holmes throughout his career. “It’s hard to take stock of the last twenty years,” he said, “I mean, holy shit! It’s like everything flatlines! I try to be present – I have an appreciation for life and work, and I don’t like to look back. It’s surreal.” When asked about his life outside of the screen, he smiled and looked to the audience at Sophie, and mentioned that they wanted their three boys to have a relatively normal childhood, so they do their best to keep them away from the spotlight. “They will probably hear from their friends that I’m Dr. Strange,” he joked.

The Power of the Dog has both captivated, stunned, and challenged audiences all around the world, taking on the difficult and often controversial subjects of sexuality and toxic masculinity. His character, Phil Burbank, is complex and troubled and most of the time downright detestable; but when asked about the character, Cumberbatch said, “I have to admit, I like him. He’s deep and conflicted and [in playing him] I was allowed to understand him.” He then went on to deliver a powerful statement saying, “we can’t move past toxic masculinity until we look under the hood and examine it. We need to teach our sons to be feminists.” The Power of the Dog is moving and brilliant, with beautiful cinematography by Ari Wegner, and has garnered an impressive twelve nominations at the Academy Awards this year, making it the most nominated film of the year.

Jane Campion’s pride was palpable as she stepped onstage to present Cumberbatch with the Cinema Vanguard Award. She recalled how much of a pleasure he was to work with, and how he had always challenged and supported her in ways that she couldn’t repay. He accepted the award with grace, thanking his family, friends, and of course his fans, for supporting him and giving him the notoriety he has today.

Whether you’ve been following him since the beginning, or you have just boarded the Cumbertrain, we can all agree that the man has talent. If the 300-plus nominations that The Power of the Dog has earned doesn’t convince you, just run up to any kid on the street and ask them who Dr. Strange is.