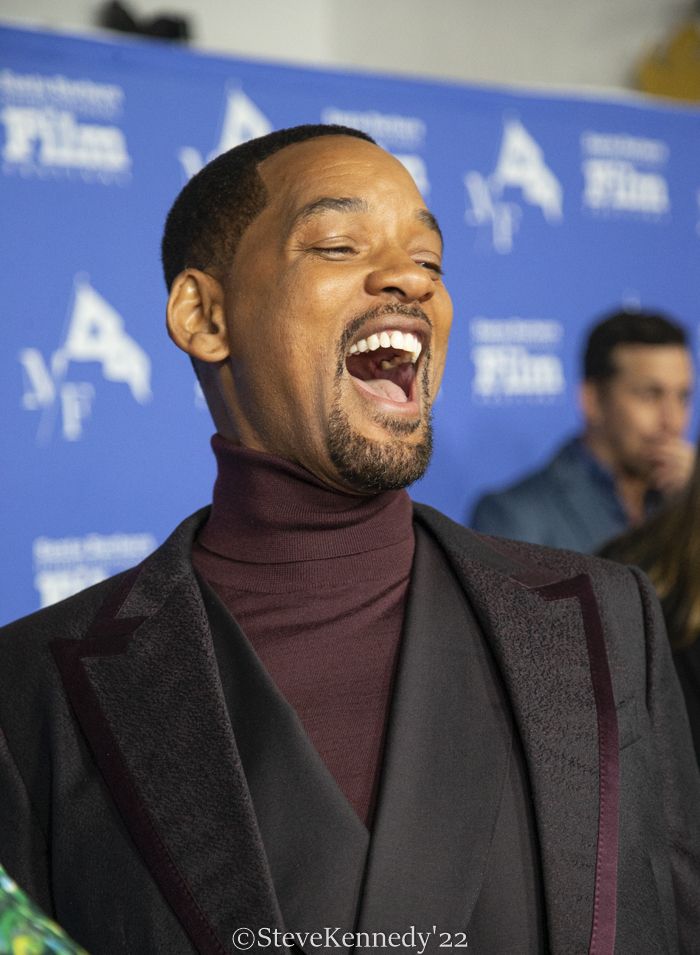 Written by Briana Westmacott on 09 March 2022 Posted in SBIFF Reviews.

They entered with a holler. Will Smith and Aunjanue Ellis crossed the stage radiating in colorful clothes and charisma, the audience was on their feet. Fashionably late, the actors strolled in after introductions from both Roger Durling and moderator Scott Feinberg. As they made their way to the couch, Smith gave a loud holler back to the crowd and the night began with a fervor worthy of these two actors receiving the Santa Barbara International Film Festival award for Outstanding Performers of the Year.

Hollywood Reporter’s Scott Feinberg began the tribute by looking at Ellis’ past work. The audience watched clips from Men of Honor, Ray, and The Help, and Ellis’ talent was celebrated by fans. Feinberg then switched focus to Smith and his early work, including his beginning in Hollywood with music. Smith’s fans gave shout-outs from the audience for his achievements in rap music. Smith said, “Music videos were predecessors to my acting career.” He explained how the music videos began his storytelling process which was followed by the infamous Fresh Prince of Bel Air. Smith’s impression of Quincey Jones (co-creator of The Fresh Prince) had the audience cracking up. Clips from Men in Black and Independence Day, were shown and Smith explained his early attraction to action films. Feinberg listed all of Smith’s early success in this genre of movie and Smith admitted he was “on a run” at that time, “You can’t plan that kind of thing. That’s the universe at work.”

Ellis’ career has picked up speed over the past five years. The crowd watched clips from her work in If Beale Street Could Talk and The Clark Sisters, and she explained her love for creating characters, “I love the idea of leaning into someone who moves the room.” While Ellis may carry a quiet aura about her, her acting is fierce. Feinberg transitioned to showing some of Smith’s work with previous biographic roles as the crowd was shown clips from Ali, Pursuit of Happyness and Concussion before looking at their biopic work together in King Richard.

King Richard was a passion project for Smith. His root interest in the story goes back twenty years when he first saw a reporter ask Venus Williams why she was so confident, and her father jumped in to answer the question. The interaction sparked Smith’s interest, and once he read the first ten pages of the script, he knew what to do; he would play Richard Williams. Ellis was drawn to the project as she observed Oracene’s quiet way of coaching her daughters, “She was a mother always there, looking on and mysterious.” She went on to describe the Williams’ relationship, “If Richard was the architect of their dreams, then Oracene was the builder of that dream.”

Feinberg began to heckle Smith about the tennis short shorts he wore throughout the film, and they bantered a bit before Feinberg showed the audience a picture of himself when he was a ball boy at one of Venus Williams’ early tennis matches. There was a lot of laughter on stage and throughout the crowd, even when there was a squabble within the audience that had to be addressed by security. The evening was laced with liveliness.

Feinberg proceeded to ask the actors, “What makes this movie so special?”
Smith replied, “…there’s a magic factor. Lightning struck on this one and no one controls lightning.”
An audience member interrupted with a holler: “We love you, Will!”
The actor grinned out toward the crowd and continued, “It was part science, a little bit of art, and a lot of luck.” He went on to praise Ellis’ acting skills and talent, and she thanked him for bringing her on cast to make King Richard.

Feinberg cued up the “kitchen scene” from the film and the crowd watched the clip. At the end of the segment, the audience drew a collective breath as the entire theater went still. Silent. The power of these two outstanding actors had swept over the room. Ellis leaned over and whispered something to Smith. The crowd sat frozen. Smith broke the silence with his bellowing laugh and told the audience that she had whispered that was the very first time she had watched the “kitchen scene.” Smith, staying true to his comedic character, joked with her, “You really should take a weekend and watch some of your work.” Again, laughter filled the room.

King Richard’s director Reinaldo Marcus Green presented the actors with their awards. He began by reading his words of praise from a piece of paper that Smith quickly stole from him, Will Smith being Will Smith. Reinaldo couldn’t help but laugh and continue on. He described Ellis’ quiet intensity and how both actors “steal the screen” with their work. It’s no wonder Smith and Ellis were recognized by the SBIFF and an animated audience for their outstanding acting.