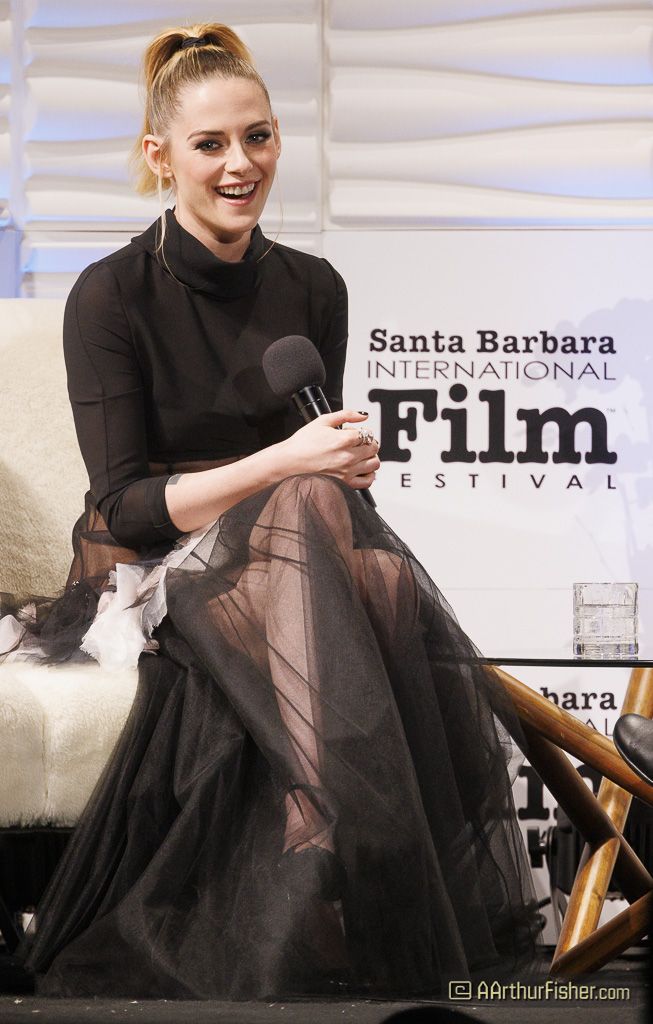 Written by Hillary Gordon on 05 March 2022 Posted in SBIFF Reviews.

The Only Words You Need To Hear: Kristen Stewart

It was a blustery night on the red carpet as Kristen Stewart greeted excited fans in front of The Arlington Theater. They moved where she moved, shouting her name and running along the barricades that line the 1300 block of State Street every year during The Santa Barbara International Film Festival.

The excitement was palpable as the SBIFF returned to in person events for the first time in two years; covid rendering it too risky to gather in large groups in 2020 and 2021. Stewart arrived at Arlington looking every bit the glamorous Hollywood star that she is. Hair in a tight pony, in a sheer black dress, Stewart was personable, thoughtful, playful and entertaining as she received the American Riviera Award, presented to actors who have made a significant contribution to American Cinema.

Many associate Stewart with Bella Swan- the teenager caught in a vampire love triangle in the highly successful Twilight Saga film series. It’s true the six films that were released between 2008 and 2012 made Stewart a household name, but when she was cast as Bella, she had already been acting for years. Raised by parents in the film industry in the San Fernando Valley, Stewart was introduced to filmmaking at a young age, “I never not wanted to be an actor,” she told Anne Thompson, the Indy Wire editor long involved with the SBIFF. At 8 years old when she began auditioning for commercials, “I had already acquired the desire,” she said.  At ten she landed her first feature film, starring alongside Jodie Foster in Panic Room. Foster, a former child actor herself, “didn’t think I would continue acting,” Stewart said. Foster assumed Stewart would work in other areas of filmmaking, “but I’m a masochist,” Stewart said, ``I love how much [acting] hurts, I love how scary it is.”

Throughout the tribute, clips from Stewart’s many films were played on the big screen, to which she could be heard groaning in embarrassment. “I’m sorry, I’ll shut the fuck up,” she said with a laugh. When discussing auditioning for her role in Into The Wild, where she played a teenage musician, she was asked if she had always been a singer. “Clearly not,” she said with a laugh. She said she auditioned by playing The Beatles’ classic “Black Bird.” Director Sean Penn could see just how nervous 14-year-old Stewart was and asked if she wanted to turn around to play the song, not having to face him. She did, and she landed the role. The making of that film, she told the audience, was “full of rogue, crazy shit.”  But that the film was “a real, alive thing.” When asked if she related to her character Bella Swan from Twilight she said, “Yeah, of course. Bella thinks she can take it. Sometimes he can, sometimes she can’t. I loved the idea…of when you fall in love for the first time. It’s sexy, it’s cool.”

In 2012 Stewart was the highest paid actress in Hollywood and has an impressive number of awards to her name. She was the youngest person to ever receive the BAFTA Rising Star Award, and quite notably, the first American to win a Cesar Award, the French version of The Academy Awards. And now, for the first time ever, she’s been nominated for an Oscar for her role as Princess Diana in the film Spencer. Nearly unrecognizable in her role, she admitted, “there’s no way I could have ever gotten it perfect.”  She talked to the audience about playing Princess Diana, and capturing her loneliness, her isolation. “She is the first person who wanted to reach out and touch people, but she’s not allowed to be touched. And that pain is constantly present. This sort of stifled, muzzled thing where she’s not allowed to talk, but she’s revered and loved and celebrated for all the things that aren’t really satisfying to her. I feel that from her. These could just be my experiences, my projections, but they’re mine, and that’s what I play in the movie.” When asked how she perfected Princess Diana’s posh British accent, she said, “I just wanted to fall in love with a few aspects, and really hang my hat on those things, and then actually kind of be myself. I mean who else can I be? And ya know, I had a really great coach.” She went on to describe Princess Diana’s communication style, “her voice is so unique; and the way she communicates is so sideways and so cryptic, so every move, every look, every intonation, feels like it’s desperately trying to communicate.” Communicate Stewart did, and quite well. Her role is widely revered as her personal best, and possibly the best performance of the year. When Roger Durling, executive director of SBIFF brought Stewart on stage, he said he’d woken up on the morning of the Oscar nominations, afraid Stewart wouldn’t be recognized for her role in Spencer. “When I heard her name,” Durling said, “I thought, all’s well with the world, thank goodness!”

Fellow A-lister Charlize Theron was sitting front row center, dressed in a short, rainbow, shimmering dress, rooting her friend on. When it came time to present the award, she came on stage and gave a funny, profanity-laden speech about her friend and castmate on the film Snow White and The Huntsmen.  “In that film Kristen plays the fairest of them all,” Theron said from the podium, “And I, as the evil queen, hunted her down for her youth and her beauty. Nothing’s changed,” she laughed.  Looking gorgeous and glamorous, Theron continued, “When we filmed that movie, I got to see Kristen’s process up close, and man does she have a commitment to her craft.” She went on to speak of Stewart’s frequent rants on set once a scene was finished shooting. “Before the director could even say cut, Kristen herself would cut us by blurting out about 40 F-bombs.” Theron said. She then went on to imitate Stewart, stomping her feet, flailing her arms and saying the F word in every way possible, to which a delighted the crowd laughed and cheered.  With a hand over her heart, Theron looked at Stewart and said, “It’s been so fun to watch the trajectory of your career.” And it has been fun- for Theron and for fans alike. Whenever Twilight was brought up in conversation, there were audible yelps and claps from the audience. Proving that Stewart’s acting has had a profound effect on a generation who has grown and continues to grow with her. Stewart, now 31, spoke eloquently throughout the evening, but also like she was your best friend, describing thing as “sick,” calling everyone “dude,” and telling stories about having the paparazzi snap a picture of her smoking a bowl with her dog and her boyfriend on her stoop during the Twilight days.

Whether Team Edward or Team Jacob, so many of her fans, new and old alike, will be Team Kristen when the Oscar for best actress is announced. If she takes the coveted award home or not, one thing is for certain- Stewart will continue to make movies. “I love making movies, she said. “I love a lot of people to see them,” And it’s clear to all that her fans, her colleagues, her audiences, all love it too.