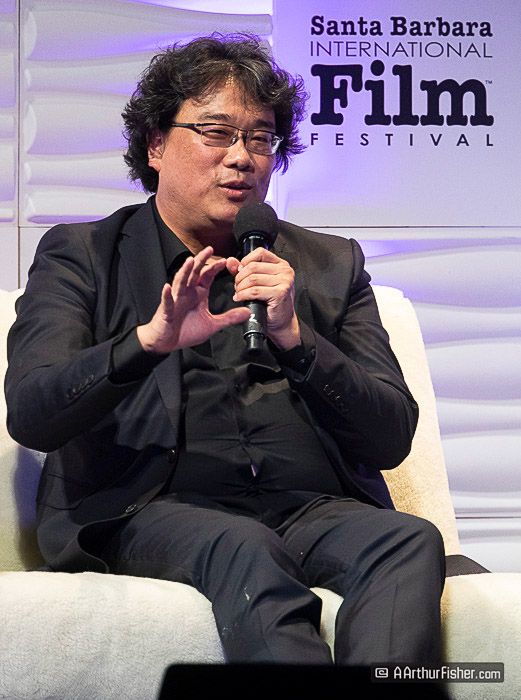 Written by Hillary Gordon on 24 January 2020 Posted in SBIFF Reviews.

It’s won SAG awards, Golden Globes, took the highest honor at The Cannes Film Festival, and made Barack Obama’s annual list of best films. A quick google search will bring up dozens upon dozens of honors the film has accumulated. And now the Outstanding Director of the Year Award at the 35th Annual Santa Barbara International Film Festival award can be added to the prestigious and fast- growing list.

Santa Barbara Film Festival Executive Director Roger Durling announced to the audience at The Arlington Theatre that there were three reasons Bong would be honored with the award: One, he said, is it’s an international film festival and SBIFF takes that title seriously. Two, this year marks the 100 -year anniversary of film in Korea. And, three, Bong’s masterpiece, Parasite, rocks. “Do we need to say anything more?” Durling asked.

Bong has long been famous in his home country and among cinephiles throughout the world. He has a dedicated online following who call themselves the “Bong Hive.” But, the average American filmgoer is just getting to know this funny, charming and brilliant filmmaker. Moderator Scott Feiberg of The Hollywood Reporter did his fair share of research on Bong, and began the tribute asking about his childhood. Sitting next to translator Sharron Troy and breaking in and out of English, Bong told the crowd he grew up in a small town before moving to Seoul. He said no one in his family was particularly interested in sports or travel, so they spent a lot of time watching television and movies. Oftentimes films were edited for content on Korean TV, and in noticing these omissions, Bong “started cultivating a cinematic language of my own.”

When Bong got to college he majored in philosophy, “but I know little about it,” he said. He joined a cinema club and was quite pleased that Freiberg knew the name of it, The Yellow Door Club, named after the color of the door to the room the group met. “You’ve researched some very strange things,” Bong said to Freiberg with a laugh.

The evening was a celebration of all of Bong’s film and his successful career. Clips were shown from Memories of a Murder (2003), The Host (2006), Mother (2009), Snowpiercer (2013) and Okja (2017) but the night really belonged to his latest film, 2019’s Parasite. When asked why he thought this film was so successful, why it has resonated with so many people across the world, Bong joked that it was because of the role of the housekeeper, played by Lee Jeong-eun, who sat in the audience and presented the Outstanding Director Of the Year award to Bong. Lee has played in several of Bong’s films and when asked about casting Bong said he wasn’t a fan of the traditional audition, and oftentimes watched old performances from actors. “The best decision made with this film is working with this cast,” he said. “I didn’t anticipate this at all. Didn't imagine myself in front of a crowd in Santa Barbara. From Cannes, to The Academy to Santa Barbara, it’s all new, surprising.”

Bong has some fierce competition at The Academy Awards when it comes to the best director nominee. He finds himself up against his heroes, Quinten Tarantino and Martin Scorsese. “I feel like I’ve already won the award, just being nominated with them,” he said. Recently described as “the most celebrated film maker in the world,” Bong was charming and funny and kept the mood at The Arlington Theater light during the two- hour award ceremony. When presenting the award, Lee spoke of Bong, “you’re a strange, but exciting person to work with,” she said, “you see what others don’t see.”  But perhaps Durling summed up Bong’s work the best. Looking at Bong from the podium on stage he said, “You know how to entertain, to make us laugh, to make us gasp. What we experience emotionally and visually sticks with us for days.” Surely the sign of a much- deserved recipient of the Outstanding Director of the Year award.