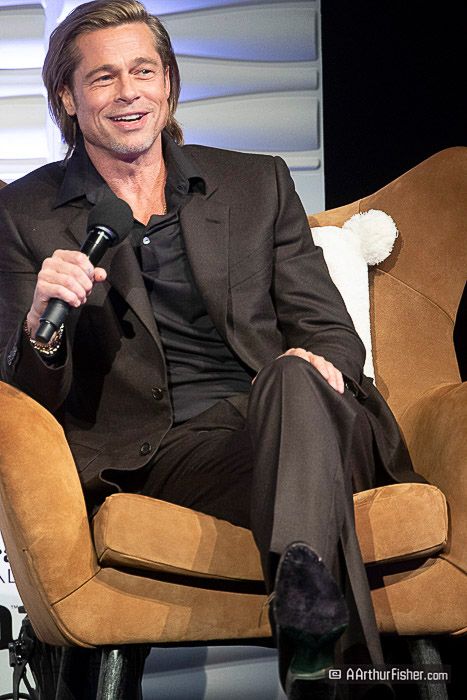 Written by Chris Johnson on 23 January 2020 Posted in SBIFF Reviews.

The sometime Santa Barbara resident (“Goleta since ’99!”) returned to a rousing reception befitting a matinee idol, replete with rabid crowds, frenetic paparazzi (resulting in minor injuries when a member of the photo corps took a spill) and a fever-pitch level of fandemonium not seen at this festival in years.

Since its inception 25 years ago, the award (SBIFF’s highest accolade) has produced somewhat of a pantheon to cinematic virtuosity, comprised of names – from Cameron to Eastwood, Dern to Depp – that instantly evoke movie milestones which have defied convention and defined the craft, encompassing an unparalleled breadth of work.

Which begged the question: Would the 2020 vision of the MMM honoring Pitt be a clever bit of (no pun intended) stunt-casting, or would it transcend the tabloid and heartthrob histrionics of a bona fide modern movie star to provide a deeper dissection of a modern movie master?

Only the evening would tell.

Clad in all black (he could’ve easily gotten away with an aloha shirt and jeans or an all-denim ensemble) Pitt arrived straight off heartfelt Golden Globe and hilarious SAG Award wins for supporting actor (let’s be honest: co-lead) in his turn as stuntman/handyman Cliff Booth in Once Upon a Time in Hollywood, building a healthy momentum for Oscar just weeks away.

In fact, it was 25 years ago to the day that Pitt received his first Oscar nomination for Best Supporting Actor in Terry Gilliam’s Twelve Monkeys.

Like the eye in the center of a hurricane, Pitt was gracious, grinning and grounded, giving ample time to fans and press alike - even the junior-high journalism kids scored an interview - as he strode the Arlington Theatre red carpet while chaos and a fusillade of flashbulbs erupted around him - a leitmotif that would continuously permeate the night’s narrative.

Once inside, a compendium of clips was shown (a daunting task considering Pitt’s 40+ onscreen appearances) and later, distilled into pairs of scenes pivotal in Pitt’s career.

The award’s namesake, Leonard Maltin, handled hosting duties, exploring the motivation, inspiration, collaboration and extraordinary odyssey of a Midwestern journalism student who went West, worked as an industrial film extra, attracted (and nurtured) some of the industry’s most venerated directors, became an international box-office idol, Oscar-winning producer, and amassed an impressive cinematic curriculum vitae along the way.

But first, the big break.

A last-minute casting decision on Ridley Scott’s Thelma & Louise marked Pitt’s big screen debut, while the film became both a cultural landmark and calling card for his career. This led Maltin to segue into Fight Club, another work that left an indelible impact upon the cultural landscape of the late nineties and marked Pitt’s second outing with director David Fincher.

When Pitt remarked how much fun Fight Club was to make, Maltin inquired as to the correlation/translation of on-set fun to onscreen success, leading Pitt to rate films on the fun-meter (for those keeping score at home, of all the Rat-Pack re-imaginings, Ocean’s 12 ranked highest, along with Fight Club and the Tarantino projects). Other fun facts included Pitt passing on a role in The Matrix, which seems to have a newfound mythology swirling around it, as Will Smith and Val Kilmer have also recently made similar claims.

Perhaps one of the more telling traits of a Modern Master is the caliber of directorial talent they both attract and seek. Pitt has not only worked with the best (Malick, Coen Bros., Redford) and repeatedly (Fincher, Tarantino, Soderberg) but actively solicited parts and participation from nascent talent, scoring the unintelligible Mickey the Pikey with Ritchie in Snatch, and Jesse James from Andrew Dominick.

Pitt also noticed the trend in the early 2000’s away from his early inspirations - what he termed the 70’s spirit of cinema, embodied in films like All the President’s Men, Dog Day Afternoon, and Three Days of the Condor – toward tent-pole blockbusters, leading him to the role of producer, guiding films like The Departed, The Big Short, Moneyball, and 12 Years a Slave.

In the beginning was the word, and throughout the course of the evening, Pitt was quick to praise the brilliance of the scribes and screenwriters whose characters he’s brought to life, showing special reverence for Quentin Tarantino.

In fact, Tarantino sat on this same stage in 2013 and revealed his intransigence with actors improvising his scripts – a fact that Pitt seemed to relish, “Quentin paints a very specific picture.”

When pressed by Maltin on Tarantino’s penchant for taking liberties with historical fact, Pitt defended the director’s vision as a product of growing up in an age of television where the good guys always won and triumphed over evil and it was his way of portraying the way the world as it should be. He also opined that the movie world would be a boring place without Tarantino films.

After clips from Pitt’s latest work in Ad Astra and Once Upon a Time in Hollywood screened, an exuberant Roger Durling (SBIFF Director) appeared and brought this year’s award presenter, “David F***ing Fincher!” to the stage, exalting the cinematic alchemy of the distinguished director and Pitt.

Fincher, in turn, who has worked with the actor on Seven, Fight Club, and The Mysterious Case of Benjamin Button, took the opportunity to highlight probably one of Pitt’s greatest, yet least recognized talents. “I watch actors for a living,” he began. “Brad does what others can’t. He idles smoothly at 3000 rpm.”

With Pitt’s pendulum swing from Modern Movie Star to Modern Master complete, etching his place indelibly in the Pantheon, Fincher vowed more collaboration ahead in the spirit of Scorsese/De Niro.

Pitt accepted his trophy and exclaimed, “This will not help my hubris.”

“What comes next in Project Mayhem? Only Tyler knows.” – Fight Club