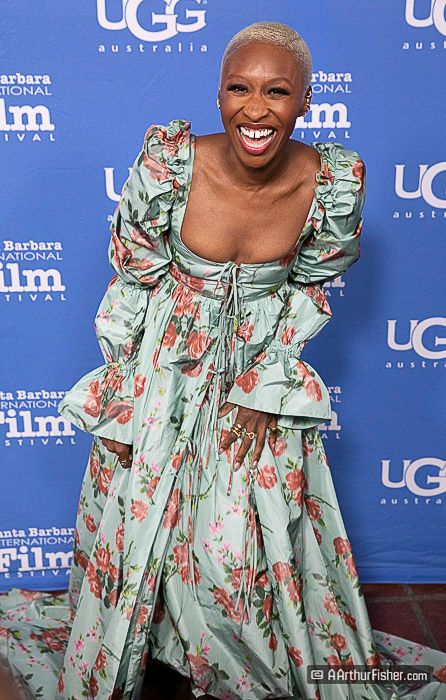 Written by Jennifer Strube on 19 January 2020 Posted in SBIFF Reviews.

Stars were certainly aligned and aglow on Arlington’s red carpet Saturday evening. From Golden Globe winners to Oscar nominees, State Street was electric with Hollywood glamour, as eight virtuosos radiantly graced the theatre, ecstatic to mingle with the crowd.

And they didn’t waste time to dive deep, the vogue of their costumes second only to their depth.

Oscar-nominated Florence Pugh (Little Women) glowing in a floor-length coral gown, paused with me to comment, “As Greta proved by the end of the film, our conceptions of love and marriage and economics are all bullshit. Equally, if we can look into one ounce of what Amy is, as she is bold and loud and outspoken and beautiful and fierce, and find an ounce of that in ourselves, we might have a more enjoyable time at life.”

Golden-Globe winner and Best Actor nominee George MacKay (1917) answered how the film changed him: “My idea beforehand was that war was constant fighting and it wasn’t. You have these periods of stasis and quiet and boredom that gets broken unexpectedly by this awful violence and that uncertainty, that tension that these men were existing in, was something I hadn’t really considered before.”

A glowing, giggling Golden Globe nominee Beanie Feldstein (Booksmart), disclosed, “Yeah, it’s good to be a ‘good girl.’ But in Booksmart, my character just thinks she’s good, but really she’s a little bit judgy, and she has to learn that hard lesson.”

Two-time Oscar nominee Cynthia Erivo (Harriet) was resplendent in a baby-blue floral gown, pausing to joke how curious her body glitter was. “I’m not sure what this is; my makeup artist powdered it on, but I love it.”

Inside, the energy continued to glisten, the crowd on their feet as each of the eight stars took the stage alongside Dave Carter, ten-time SBIFF moderator and host of Turner Classic Movies.

“I love it here, Santa Barbara,” exclaimed Golden Globe Winner Awkwafina (The Farewell). “Ladies, we are all going out tonight!”

The evening was a hybrid of infectious opulence punctuated by thought-provoking brilliance. Light-hearted Aldis House (Clemency) described how playing a death-row inmate brought him deep fulfillment and meaning. “Can I get the audience to find mercy for my character before they judge him… that helps me live my purpose.”  Booksmart’s Beanie Feldstein championed her film’s homage to youth, saying, “The film is a testament to the power of young people who are so invested in society.” Gotham Award winner Tayler Russell (Waves) fueled her character seeing the child in everyone around her. “I got into my role by asking for baby photos of my cast. Seeing them as children made me love them more. You should try it.”

Among the eight actors, four gracefully joined us from across the Atlantic pond. Taron Egerton (Rocketman), whose role as Elton John won him the Golden Globe, remarked, “Growing up in a rural Welsh town, the Golden Globes feels like something that happens to other people… I’d love to claim this film was some great labor, but I just loved it… And as for the dancing, if you can’t do it properly, just go for it. That was my motto.” Egerton’s drama school classmate, the stunning Cynthia Erivo (Harriet) had a slightly different filming experience: “We filmed in 27 degrees, in water, and I opted out of the wetsuit. I kept thinking, this might be hard, but it’s never going to be as hard as what Harriet Tubman went through.”  George MacKay (1917), whose film is up for ten Oscar nods, said, “The film is made to look like one long shot.  If you messed up at the last four seconds of a six-and-a-half-minute clip, you had to restart. And that’s when I dropped the rifle, of course.” Florence Pugh (Little Women and Midsommar) raved, “I got to persuade the audience to like the cheekiest, naughtiest little child… to show how clever Amy was to choose the life she had.”

“To see you all is just breathtaking,” said Christopher Lloyd, Santa Barbara hometown favorite and presenter of the evening’s Virtuosos Awards. The Virtuosos Awards are granted each year to performers who’ve changed us, and once again, this cast did not disappoint. Thank you, dear Hollywood, for proving that virtue and virtuoso can still go hand in hand.