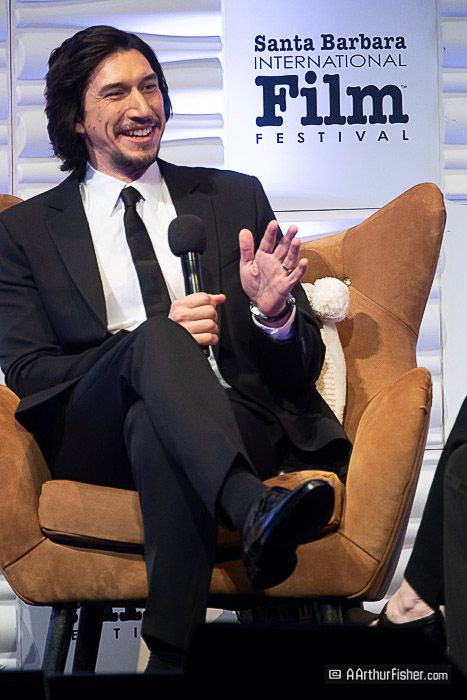 Written by Briana Westmacott on 17 January 2020 Posted in SBIFF Reviews.

The red carpet was buzzing. A swarm of fans hovered in the street waiting for the stars to arrive. The line of ticket holders stretched down city blocks for the sold-out SBIFF event honoring Scarlett Johansson and Adam Driver as Outstanding Performers of the Year.

“Scarlett isn’t coming down the red carpet,” a photographer informed me in the press box minutes before the event was set to begin; disappointment sank in.

Ticket holders began to be ushered into the Arlington Theatre as fans awaited Driver’s arrival. Screams erupted from the street when Adam finally made his entrance. Driver’s tall, dark presence on the red carpet was commanding even if fleeting.

Inside the theater, Roger Durling looked less than enthusiastic as he announced, “I have some good news and some bad news. I’ll start with the bad…” Durling proceeded to read a letter from Johansson regretfully explaining how she had become violently ill and would not be able to attend the evening. The crowd sighed.

“But we do have the amazing Adam Driver here…” Durling shifted gears and the audience broke into applause. The show must go on, and that it did.

Johansson and Driver star in the Academy Award-nominated film Marriage Story, written and directed by Noah Baumbach. With six Oscar nominations, Marriage Story depicts the emotional, universal truths that follow a family being shattered by divorce.

Indie Wire editor-at-large Anne Thompson conducted a lively interview with Driver. The first words out of Adam’s mouth got the audience laughing and he proceeded to entertain the audience with his animated stories for the following hour.

Girls, Star Wars, The Report, Silence, Paterson, and BlacKkKlansman are among some of the screenwork that was highlighted throughout Driver’s interview along with his Tony award-winning stage performance in Burn This on Broadway. To say Driver has been busy is an understatement.

Adam gave nods to both the Juilliard School and his time spent in the Marine Corps in shaping him as an actor. He paralleled movie-making and military work, “Both are groups of people trying to accomplish a mission.” He went on to emphasize the need for self-discipline and teamwork in finding success.

Driver sang praises to Marriage Story’s writer/director Noah Baumbach, “His scripts are to the letter and feel like theater to me.” Driver described the collaboration process with Baumbach as it began long before filming and stated multiple times that he and Noah, “We get on.” Driver said he was lucky to have found someone with the same work ethic, which he also described as an “illness.” It is a drive for perfection that oftentimes leads to exhausting every option within a scene through multiple takes. “We are telling the truth within the time we have,” Driver attested to acting and filmmaking.

Creating a love story about a divorce is not easy. Driver and Johansson met only two weeks prior to filming for rehearsals. The infamous fight scene in Marriage Story took two full days to shoot. Driver described it as a “love scene––we were two people trying to be as naked as possible.” He went on to describe the careful choreography and poetic prose to be a backbone for the actors’ performances in the film. The result, audiences witness characters grieving the loss of love and grasping for a new position in life as a divorced family. Driver complimented Johansson’s acting talent and skill and wished she could’ve been there to accept the award.

“Kylo Ren,” just the mention of this name by Thompson evoked cheers from the audience and a grin from Driver. “Yeah, it was six years of my life,” Driver waxed nostalgic of Star Wars as the interview, like the trilogy, came to an end.

Durling returned to the stage to hand Driver his award and the audience took to their feet in a standing ovation. Driver joked that he had little left to say, but went on with some wise words: “Films and art can lead people out of the dark. They can take a thought or articulate a feeling you think is private and singular to you, and connect it to a community you didn’t know exists. I think acting is a service industry and I’m there in service of the actors, the crew, and the story overall which is more important. I believe in the potential effect of great collaboration.” Isn’t that the truth!