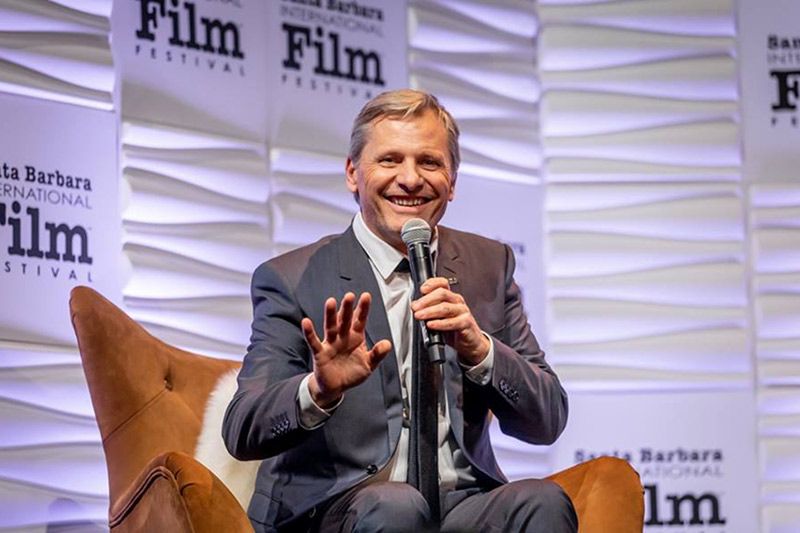 Written by Briana Westmacott on 04 February 2019 Posted in SBIFF Reviews.

Viggo Mortensen: A Force of Nature

Once Viggo Mortensen sets his mind to something, there’s no stopping him. He speaks seven languages: English, Danish, French, Spanish, Italian, Norwegian, and Swedish. He is well known for his horsemanship, swordsmanship, athleticism, work ethic, and emotional range. Beyond acting, he is also defined as a producer, author, musician, director, photographer, poet, and painter. Truly, what can’t Viggo do?

One thing he couldn’t easily do was get to the Arlington Theatre on Saturday due to a powerful winter storm that led to the 101 freeway closure. But, did that stop him? Not even the forces of nature could do that. When his vehicle was halted in Camarillo, he was told it would be impossible to get to Santa Barbara on time to receive the SBIFF American Riviera Award. So, he took to the sky on a chartered flight. He was not going to miss the SBIFF tribute or disappoint his fans.

Viggo walked into the Arlington Theatre an hour late with a brilliant rainbow arched across the sky as his backdrop. It was as if he had waited for that perfect moment when on the contrary, he had hustled hard to get there.

Throughout his 34-year acting career, he has often been described as determined (and a bit stubborn too). Mortensen told moderator Pete Hammond stories about his first two movie acting rolls and how his scenes ended up on the editing floor. Woody Allen was one of the directors that cut Viggo from his movie. In the beginning, Viggo’s own mother questioned whether he was actually acting. Now, after years of perseverance, he has achieved his third Oscar nomination, and no one doubts that he has become a master in his craft.

After patiently awaiting Mortensen’s arrival, the audience at the Arlington Theatre was wowed by clips from his expansive film career and tales from his true-life experiences behind the screen. Viggo told of a time he chipped his tooth while filming The Lord of the Rings trilogy. Did he stop filming that day? Absolutely not! He super-glued his tooth until director Peter Jackson demanded he go to a proper dentist. Viggo showed up to the dentist covered in Orc blood, had his tooth repaired and returned to the set to resume filming.

Mortensen is known to be one of the best actors on horseback. In the Lord of the Rings trilogy, he had two horses that he connected with and kept after the filming wrapped. The same thing happened when he filmed Hildago, Viggo told us that he still has TJ, his horse from the movie. Along with equestrian skills, Viggo is also an expert with a sword.

Green Book has received five Oscar nominations; Viggo is up for best actor. Mortensen was intent on complimenting his co-star Mahershala Ali, writer/director Peter Farrelly, Dr. Shirley and the entire Vallelonga family. One thing that Viggo emphasizes to be of great importance in his choice of movies is the story. With Green Book, he wanted to tell Tony Vallelonga’s story; he wanted to show the world Dr. Shirley’s music; he wanted to combat hate and racism. Green Book achieved all of this and so much more.

Ed Harris came to the stage to present Viggo with the SBIFF American Riviera Award. Harris was adamant when he said, “Viggo is one hell of a human being.” The audience agreed as they got to their feet to give Mortensen a standing ovation recognizing his acting achievements and tenacity.