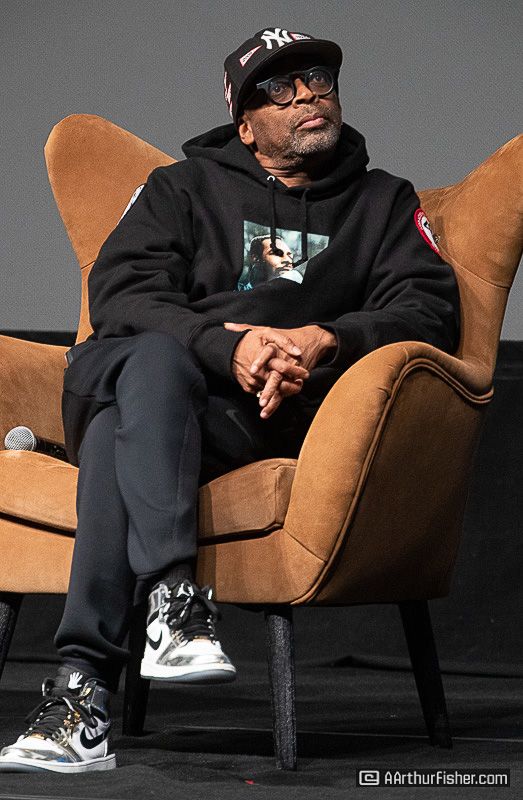 Written by Jennifer Strube on 01 February 2019 Posted in SBIFF Reviews.

Unless you’ve scored a ticket to the 91st Academy Awards, Santa Barbara’s Arlington Theatre was the only place to see five Oscar-nominated directors together on one stage.

“This lineup is a lineup to push the envelope. We have great directors, among them a Polish director, a Mexican director, a black director. We need your voices more than ever,” said Santa Barbara International Film Fest’s Executive Director Roger Durling.

This year’s films are timely, with themes on the corruption of power, the absurdity of racism, the insider-life of politicians, and the beautiful pain of telling your personal story.

Moderated by The Hollywood Reporter’s Scott Feinberg, the directors each took the stage to discuss their current projects. The evening began with Alfonzo Cuaron, the beloved writer, director, and cinematographer of the stunning Roma, who commented on his 108-day sequential shoot: “Everything boiled down to time. I needed to recreate my childhood home. The cast had to look like the original characters. I wanted to shoot in the actual places; some we had to recreate and build from scratch.” In order to make true directorial magic happen, Alfonzo insisted none of his actors had the full script. “No one had the screenplay. I’d give instructions to each one of the actors separately and all instructions were contradictory.” Ten Oscar nominations later, Cuaron left his audiences with an exquisite semi-autobiographical film about his mother and childhood caretaker.

Cold War's Pawel Pawlikowski also credited family for his film’s politically-attuned, romantic inspiration. “My parents had love at first sight, a marriage, a divorce, a remarriage, a divorce. They married other people, then a remarried for over forty years.” However, making a personal story is not always a healing balm. “Cathartic is not the word,” Pawlikowski said. “Making a film is a nightmare, but it’s cathartic to survive the film.” Known to reshoot scenes with directorial precision, Pawlikowski responded, “I’m a chaotic perfectionist, and it’s a black and white film. We considered soviet Technicolor, but that would have been ridiculous.”

Next in line was Yorgos Lanthimos’ The Favourite, a riveting portrait of England’s 18th century Queen Anne and her two closest ladies. “The story of these three women felt intimate, how the personality of a few people can affect the fate of many others,” Lanthimos remarked. “I’m always trying to find a different perspective of human nature and observe people in extreme situations; it’s just an exploration.” Stemming from a theatrical background, Lanthimos asked his actors to play games for weeks before touching the script, exercises such as “speak your lines as though panting in labor.” The take away? Roger Durling described Lanthimos’ film as “a period piece where decadence, avarice and longing for power is its own punishment.” Lanthimos’ film also received ten Oscar nominations.

Spike Lee, a serial filmmaker and tenured professor at NYU, graced the stage in style touting his production company 40 Acres and a Mule. Lee became intrigued with the BlacKkKlansman script when he received the six-word pitch, “Black man infiltrates KKK. That was it.” The film, inspired by the true story of Ron Stallworth, tackles historical and present-day racism with a twist of modern indulgence. However, Lee reminded, “This is not a comedy. There is humor in the film because the premise is absurd, and there is laughter from the absurdity of the premise. But we weren’t writing jokes.” He furthered this statement in his red-carpet interview by informing me, “There are various degrees of gore and you don’t have to shoot someone in the head to be gory. It’s still a very violent film. When I see a swastika, stars and bars, that’s a violent act to me. When I see a cross burning, the Sieg Heil, those are violent acts. Pay attention to history.”

Finally, Adam McKay took the stage to discuss his latest film, Vice, a portrayal of Dick Cheney. McKay, a lifelong lover of movies said, “I was a terrible, filthy, vandalizing child throwing snowballs at anything that moved, and I had a spiritual moment watching Breaking Away (1979). For me, my breakthrough came through the avenue of comedy.” McKay went on to co-found the Upright Citizens Brigade comedy troupe, write for SNL, and direct blockbuster comedies such as Anchorman (2004), Talladega Nights (2006), and The Big Short (2015) before turning toward the Oval Office for inspiration. Why? He informed me on the red carpet, “We are all part of a representative democracy and the definition of a representative democracy is that we all have a job to do, whether you’re in Hollywood or an electrician, be that last voice resounding.”

So Santa Barbara, be that resounding voice. You may not have a ticket to the Oscars, but you’ve received insider advice from some of the greatest directors in time, all in your own backyard.