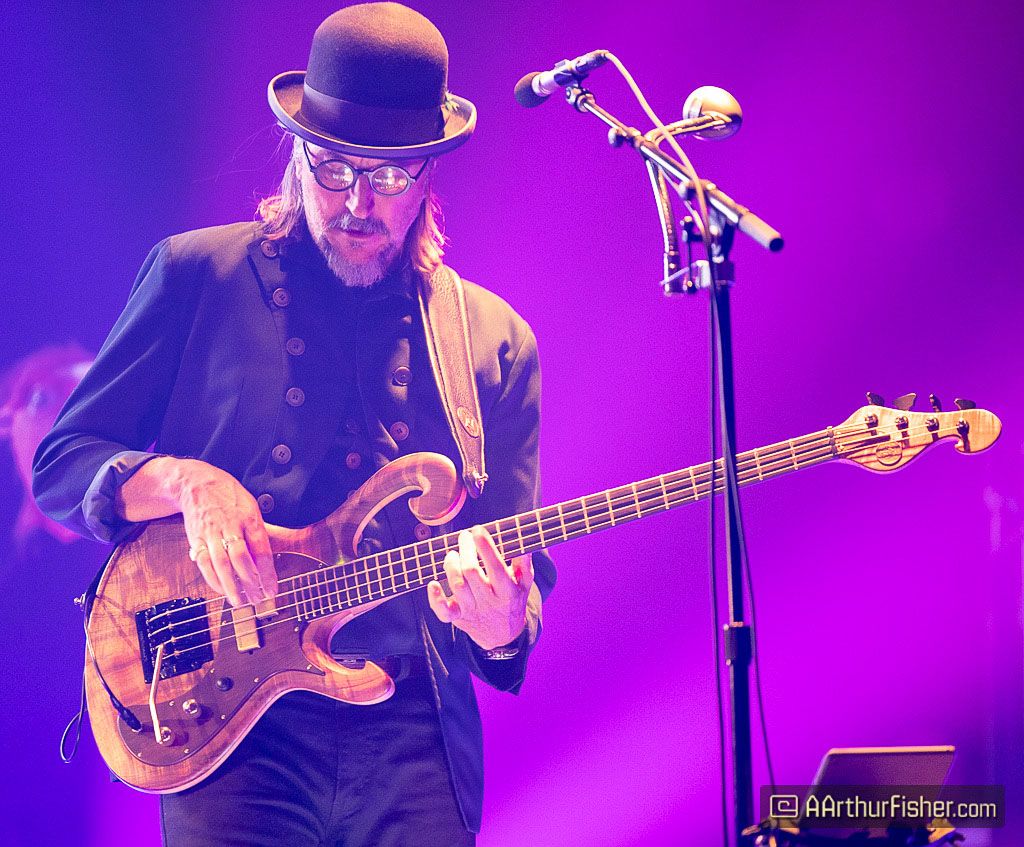 When Primus first broke ground as a next generation power trio in the 1990s, they were following in the innovative footsteps of, among others, Cream, The Jimi Hendrix Experience, ZZ Top, and of course, Rush. Their sound was fresh, energetic, and simultaneously heavy and funky. The videos were, well, let’s just say very weirdly mesmerizing. Like art projects. But instead of artsy condescension, they were delivered with a wink and a smile that portrayed Primus as a cheeky band with a sense of humor.

Flash forward to June 21, 2022 at Santa Barbara’s Arlington Theater. Primus played a two-set show as part of their “Tribute to Kings” tour. For the first set, the band played a blistering 75 minutes of their classics. However, the “blistering” aspect was a good news/not so good news scenario.

First, the good. Les Claypool lives up to his reputation as a monster bassist…impressive slapping while also shouldering much of the melodic heavy-lifting. As their fans know, Primus is a largely bass-led band, with much of their music written on the bass.

Now the not so good. The live sound lacked the crispness and energy that many people associate with the band's studio work. In fact, at the risk of sounding like my parents, the first set songs kind of all sounded the same…a somewhat monotonous, heavily effected drone where one tune bled into the next, in contrast to their studio sound. To be fair, while I grew weary as the first set drew to a close, the many Primus diehards in attendance danced and thrashed and seemed to enjoy every minute of it.

The second set featured a tribute to Rush consisting of a track-for-track replay of the classic Canadian trio’s 1977 album “A Farewell To Kings.” Truth be told, while I respect Primus and Claypool, if it hadn’t been for the much heralded Rush set, I doubt I would have been interested in seeing Primus again. So, if the tribute angle was a marketing ploy, it worked on me, and I wasn’t the only one. Roughly a third of the audience appeared to be curious Rush fans.

Primus did justice to the Rush material. It was an enjoyable audio and visual experience that hit many of the nostalgic buttons that long time Rush fans like me hoped for…from the vintage Moog synthesizer sound to the iconic shapes of the double-neck Gibson EDS-1275 guitar (provided to Primus by Rush guitarist Alex Lifeson) and Rickenbacker bass silhouetted against the backlit stage fog straight out of ’77.

Xanadu was the highlight. However, my one nit about Primus’ take on Rush was the singing. Matching Geddy Lee’s signature high voice register would be a tall order for most any singer (even Geddy couldn’t hit highest notes during live performances over the years). But instead of opting to sing an octave lower while still matching Lee’s original cadence as Claypool did, I believe it would have been less distracting if he had taken more liberty to put his own spin on it.

Overall, I’m intrigued by the concept of established bands delivering live performances that honor the classic bands who came before and by whom they were inspired. As we gradually lose the classic rock icons to time, I’m hopeful the music will live on for us to enjoy in the form of tribute performances like the one Primus cleverly delivered.

The Toys Go Winding Down

Welcome To This World

A Farewell To Kings

Closer To The Heart