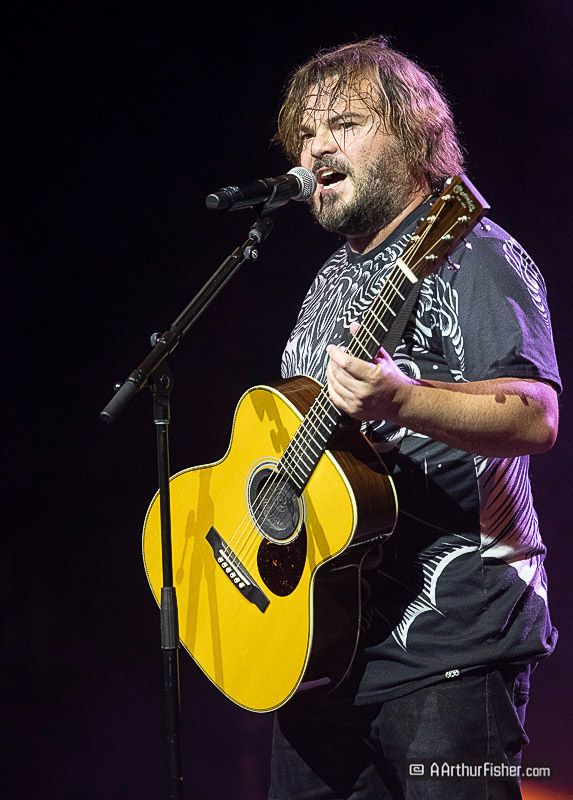 Written by Jenny Schlax on 05 November 2019 Posted in Event Reviews.

Some might consider Tenacious D a rock-band parody, but those in attendance at the Arlington Theater for their performance Sunday night would probably agree that they are, indeed, the greatest and best band in the world.

Comprised of actors Jack Black and Kyle Gass, it is easy to understand why the band might be labeled comedy-rock. However, the band’s live performance deserves proper rock band status. The show was pure rock opera, fit to meet the need “for our times,” according to Jack Black.

The Los Angeles-formed duet, Wynchester, opened the show. To kick things off, this American country band picked some ferocious bluegrass, including some Ronnie James Dio borrowed from The D’s repertoire of heavy metal covers.

Supported by long time members John Konesky (electric guitar), John Spiker (bass), and Scott Seiver (drums), Tenacious D was full throttle heavy metal. They performed their fourth and latest album, Post-Apocalypto, in its entirety behind a sheer screen while projecting cartoon images and inserting audio clips from the album’s accompanying YouTube animated series. Not one to give away any spoilers around the storyline, I’ll just say they held nothing back as they led the crowd along the penis, sex, and action-heavy rock opera. As the story came to an end, the sheer screen lifted and the band walked out in full glory. Thus ends part one of the performance.

“And now time for the greatest hits” portion of the show touted Black. Tenacious D fully entertained the Arlington Theater crowd as they rocked through their “best and greatest hits of all times.” At one point Black refused to play any more songs unless Santa Barbara got up and danced. “Take your heavy metal attitude and turn it into a dance party!” demanded Black as he danced around the stage with a xylophone (or something that looked like a 5 year old’s musical toy). Then it was back to the metal – apparently the only genre of music that matters according to the almighty D.

Highly entertaining and more than slightly heavy on the “D”, Tenacious D provided an unapologetic heavy metal performance that was more than just a satire on the genre, it was a much needed resurgence.