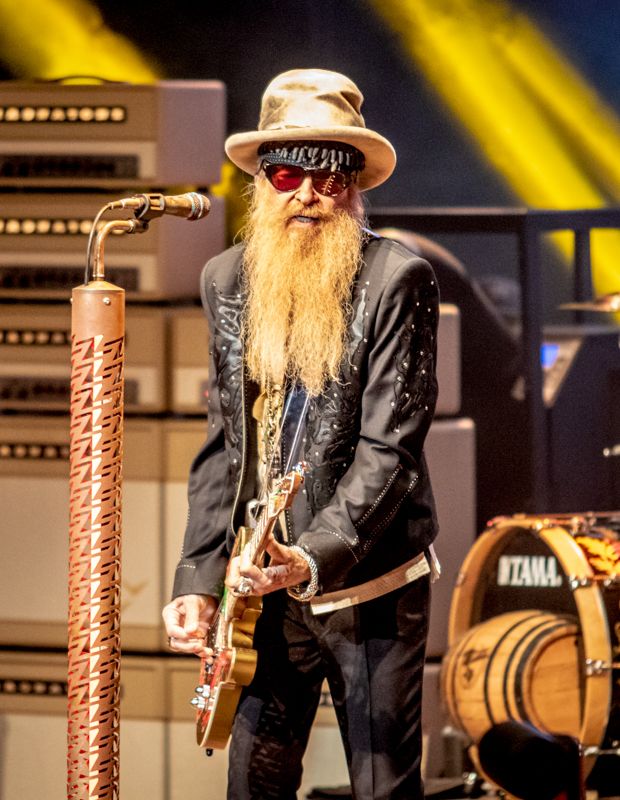 Written by Jim Youngson on 09 September 2019 Posted in Event Reviews.

ZZ Top just might hold the record for longest original line up for a top-flight act still intact fifty years in. Impressive feat, as was their show.

To rightfully celebrate their 50th Anniversary Tour Billy Gibbons, Dusty Hill and Frank Beard rolled their literally wall of sound into “Under Pressure” at 8:10pm. Fans were still jamming into their seats at the sold-out Arlington, some senior citizens naively thinking they’d get a chance to actually sit in them.

Arena-like lighting and a massive backing screen flashed colorful photos and videos, explaining the afternoon’s semi-truck congestion behind the theater. The Arlington might be the smallest venue on the tour, and fans certainly seemed to appreciate the close-up opportunity. From 1983’s Eliminator, their breakthrough to superstardom, the original and infamous MTV music videos for “Gimmie All Your Lovin’” and “Sharp Dressed Man” erupted in roars of approval.

The hair! The skirts! The heels!

This was and wasn’t, however, a nostalgic show. True to form the band ripped effortlessly and freshly thru every big hit, from their high point period of the 1970s and ‘80s: “Thank You,” “LaGrange,” “Tush,” and “Pearl Necklace.” And it’s hard to not remember Billy’s skullcap underneath his fedora, or the sheep-skin guitar/bass covers that matched MTV’s “Legs” video. Gibbons and Hill looking exactly like they did in 1983 and under the guises they sound exactly like they always have.

But while the blues are always partly nostalgic, longing or wishing for better times, this is also timeless music. Donavan and Depeche Mode may seem dated today, but the blues rarely do. In the able hands of this trio and Gibbons’s fun loving lyrics there’s a counterbalance to shtick, and continuation of what is always and what will ever be: roadhouse blues and a love for early rock and roll.

Emerging along with Skynrd and the Allman Brothers, with Willie and Waylon’s Outlaw country about to erupt in Austin, these guys took Texas alternately to the swamp and the pavement, culling characters and giving them voices.

Well, I was rolling down the road in some cold blue steel
I had a blues man in back and a beautician at the wheel
We going downtown in the middle of the night
We laughing and I'm joking and we feeling alright

Easing down the highway in a new Cadillac
I had a fine fox in front, I had three more in the back
They sporting short dresses, wearingspike-heel shoes
They smoking Lucky Strikes and wearing nylons too

Well, I was moving down the road in my V-8 Ford
I had a shine on my boots,
I had my sideburns lowered
With my New York brim and my gold tooth displayed
Nobodygive me trouble cause they know I got it made

Something not as apparent to this reviewer prior to the show is the love ZZ Top has for early rock and roll. Closing with “Jailhouse Rock” points out one of the great things about this bad: they’ve never seemingly taken themselves seriously. Beards, catchy/funny/light lyrics, bling, dance moves, hallmarks or to ‘50s Rock N Roll.

But don’t be fooled. This is a very talented hard-working band that simply doesn’t go out of its way to say, “hey fans, we ARE important!” How refreshing, when so many artists with less talent take all they do too seriously, which is often boorish. Watching Gibbons crushing his fretboard or Hill filling in the guitar, drum gaps with a gritty, trashy sound (his words) gets backed by stacks of stage amps that make ZZ Top’s sound like no other.

The only disappointment of the show was the length. Clocking in at a paltry 1:15, it would’ve been heaven to hear a couple jams and nods to their current work. Still, fans left happy. Outside the exit migration enthused, “So many hit songs! That was rock n roll history in there!” .