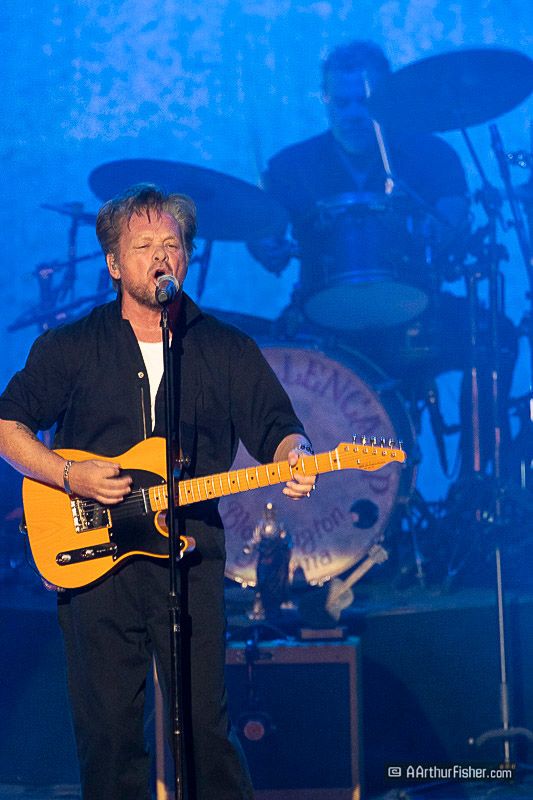 Written by Jim Youngson on 03 May 2019 Posted in Event Reviews.

Keeping it real with John Mellencamp

Georgia O’Keeffe once famously said that she really didn’t gave a damn what people thought of her work; she was just doing what she wanted.  John Mellencamp may be viewed in that same vein, with perhaps his head looking back over his shoulder to make sure you’ve noticed.

While proud if still insecure, he’s clearly not interested in the fame as much as his explanation of the fame.  In an odd twist, the evening began with a 20-minute video documentary that parallels the artistic life of a painter with Mellencamp’s own.  Compellingly you see this small town boy from rural Indiana originally set out to be a painter himself, and thru grit, bravado and luck his career turns to music.

After fighting off the industry types that initially manipulate him into being someone he’s not (Johnny Cougar) and having a heart attack at 42, he emerges as his True Self.  While rightfully proud, John Mellencamp’s seemingly still struggling with it all, seemingly still seeking to be taken seriously. Ten minutes too long, it struck as a bit much, more of an ego trip than an explanation for an artist that has clearly been taken seriously for a long time.

Decades since his ‘80s height of popularity Mellencamp quietly but consistently continues to produce first-rate originals blending rock, blues, folks and country.  In today’s time vortex where so many classic rockers are still hitting the road, one might miss him in the shuffle. Or take him for granted. Make no mistake, the Number One touring act of 1988 is a legend for good reason.  The songs speak for themselves, with both the lyrics and that singular Mellencamp sound influencing two generations of Americana artists.

Of course, people come to his concerts to hear “Pink Houses” and “Small Town,” but the treasure trove that he brought to the show at the Arlington Friday night of newer material is what made the show a thematically enriching experience.  It wasn’t just a greatest hits show, as he wove the past and present, the obligatory and obscure, into a narrative that rings as relevant today as 35 years ago.

Much of the set list he has been playing for the past year and can be heard on his latest live album Plain Spoken – From the Chicago Theatre.  In the finest of singer-songwriter tradition what can’t be heard thru streaming is the storytelling, some deep and much very funny, that he threaded to great effect, seamlessly tying meaning together.

The “working man” theme has always been Mellencamp’s bread and butter, from the forgetful “Jack & Diane” to the eternal “Minutes to Memories” (both nicely reworked from their original).  His audience, dressed up in their rural rust belt finest (and he too sporting a one-piece mechanic coverall), know his stuff and sang along: cougars on the prowl, biker vests and old white guys (okay, this last group isn’t dressing up!) and a welcome younger demographic.

The most poignant political songs of the evening bookended the black and common American experience; one new “Easy Targets,” and the classic “Pink Houses,” both stirring and stinging in addressing today’s national landscape.

The first is “Easy Targets,” one of two remarkable torch ballads that Mellencamp has created in recent years (the other he didn’t play but a must listen “The Full Catastrophe”).  A bit Sinatra with a message, or more like Tom Waits, with a smoky setting and distant piano, he catches the mood of today’s progressive movement:

So, black lives matter
Who we trying to kid
Here's an easy target
Don't matter, never did
Crosses burning
Such a long time ago
Four hundred years and we still don't, let it go

Well let the poor be damned
And the easy targets too
All are created equal
Equally beneath me and you
Children crying
Under the time-keeping sun
The war on the easy targets
We won't ever, get this done

We all know the words to “Pink Houses,” the kissing cousin of “Born In The USA,” and we might all be guilty of glossing over the true message in these anthems.  As lyrics spilled out of Mellencamp they didn’t feel nostalgic. They felt new, and now, speaking directly to the middle class American experience in 2019:

Well there's people and more people
What do they know, know, know
Go to work in some high rise
And vacation down at the Gulf of Mexico
Ooo yeah

And there's winners, and there's losers
But they ain't no big deal
'Cause the simple man baby pays the thrills,
The bills and the pills that kill

While Mellencamp has always spoken for the working stiff and the oppressed, a welcome challenge would be if he applied his considerable talents beyond his usual narrative, and put some perspective on Trump’s rise in rust belt America, which isn’t getting hammered solely by corporate America but by bi-coastal politics that aspire to every special interest but the middle American working stiff.

Finally, there were many lighthearted moments, less political and more in the vein of bringing us together as Americans and human beings, stories about his grandmother, his kids, his friends and what ties us together.

In “Longest Days,” the poignancy of ageing and meaning comes into full perspective:

So you pretend not to notice
That everything has changed
The way that you look
And the friends you once had
So you keep on acting the same
But deep down in your soul
You know you, you got no flame
And who knows then which way to go
Life is short even in its longest days

Before breaking into the closing number, the intentionally nostalgic and celebratory “Cherry Bomb,” he talked about the astonishingly short time we really have here:  “Once we’re being lowered into the ground, nobody is going to give a damn about you except for family and friends and the stories left behind.”

Still…at 67 John Mellencamp from Indiana is aging well.  He moves like a man much younger. A smoker, the voice is huskier today and less elastic, but it’s the black man’s bluesy sound he’s always wanted, believable and retaining amazingly clarity.  For all his bravado and soulful irreverence, his finest trait is that he’s the real deal. With a grandmother who lived to 100, expect him to be the guy still up there on stage down the line, with Bruce, Neil and Willie…

Stones In My Passway (guitar intro)

Rain On The Scarecrow