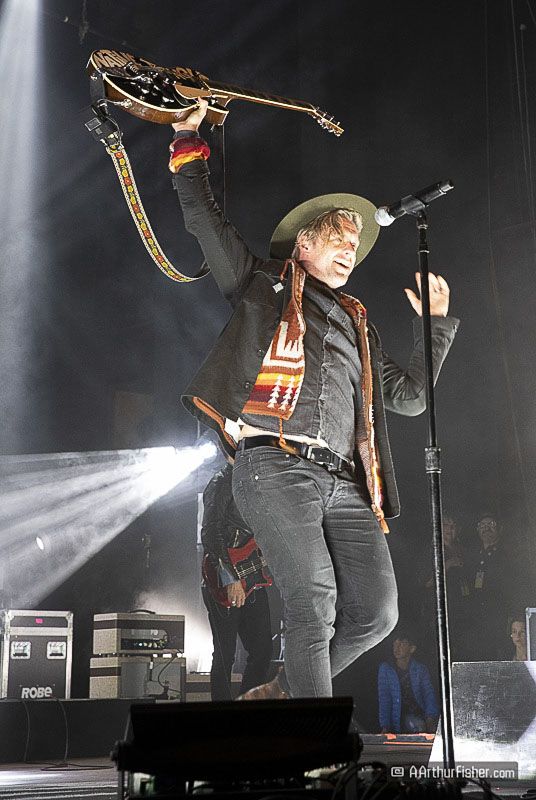 Written by Jenny Schlax on 13 April 2019 Posted in Event Reviews.

I gotta be honest with you - I was not going into this show a Switchfoot fan. Sometimes a job’s a job, you know. However, I can say I was definitely in the minority for the packed show at the Arlington, but I left reformed.

Fans came from all over to see 90’s rock icons, Switchfoot, at the Arlington Theater on a beautiful Santa Barbara Saturday night. Ladies as far away as Fresno, excited to have already seen Switchfoot four times on this tour, braved the beautiful weather to see the band.

And they were not disappointed - nor was I. A Surf/Christian rock band out of San Diego, Switchfoot rose to fame in the late 90’s, receiving a Grammy in 2011 for Best Rock or Rap Gospel Album – and you could feel the love for the band in the crowd. You could also tell the crowd wasn’t the normal Santa Barbara music event crowd – cuz they stood up in jubilee at the intro and did not sit the entire show. Switchfoot delivered all that has been missing from our current music scene  - they climbed speakers and jumped off them, they dueled guitars, and held guitars over their heads in praise. It also turned out I knew more Switchfoot songs than I thought, as songs like “Meant to Live”, Stars,” and “Live it Well” filled the theater.

During “Stars” a fan held up a sign “CAN I PLAY DRUMS ON STARS?” Lead Singer Jon Foreman admitted, “It’s risky business y’all…” but decided to let John the Fan have a go at it – and he crushed it! “My new hero John! That took some gumption!” proclaimed Foreman.

Charismatic and full of gratitude, Switchfoot filled the theater with love as Jon walked through the theater on seat backs, climbed up the staircase to the balcony, and continued the show from there – well cuz he was there.  “Thank you so much my friends, my Santa Barbara family… Santa Barbara is a mix of Pirates of the Caribbean and your favorite Mexican food spot – Pirates of the Mexican Caribbean.”